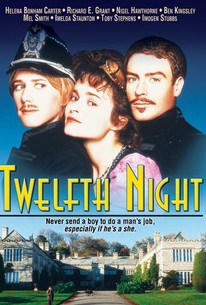 This loose adaptation of Shakespeare's enduring but seldom-filmed comedy of merry and ribald romantic mix-ups comes from Trevor Nunn, distinguished director for the Royal Shakespearean Theatre, and features some of Great Britain's finest actors. Nunn has wrought a few major changes to the tale, updating it to the late 19th century and setting it during autumn. The language has also been somewhat simplified. Following a terrible shipwreck, bedraggled Viola washes up on the shores of Illyria, a country at war with her own. Believing that her twin brother Sebastian has drowned, and knowing that as a woman she would not survive on her own, she whacks off her hair, dons a moustache and masquerades as Cesario, a boy. She gets a job working for the dashing Duke Orsino and as his page begins pitching woo to the lovely and recently widowed Lady Olivia. The trouble brews when Olivia finds herself falling in love, not with Orsino, but with Cesario/Viola who herself has fallen in love with Orsino. More trouble follows when Sebastian arrives.

James Walker
as Priest
View All

A handsome, agreeably performed rendition that fails to ignite much laughter or any real emotion.

The direction is assured, and the cast is masterly.

A comic meditation on desire, disguise and inherent bisexuality.

An entertaining movie. No more, no less.

Only fitfully do the actors actually seem to become the characters they are playing.

Stage director Trevor Nunn hasn't exploited it in his film of the chaotic Bard farce, which delivers only fitfully on goodwill the play automatically beckons.

Even if you don't know the play, or don't "speak Shakespeare," you're in for a lively, rewarding experience.

Staring sardonically into the camera, Kingsley's cool fool gives this Victorian fantasy a modern edge, as a bitter commentator who dimly views romantic love as quite absurd.

Where is Preston Sturges when we need him?

Why Nunn chose to set this version in the 1890s is a little baffling.

Twelfth Night is passable. While some of the performances are a bit silly, nothing about the film is terrible. Rather the problem is that the parts are not played with much harmony. However, Helena Bonham Carter's acting, as always, is delectable.

Okay passable Shakespeare like the type that you are usually forced to endure in a high school class but don't remember well beyond the exam on the subject.

Good cast but is just pretty blah and uninteresting.

Light-hearted Shakespeare just as it should be. Pretty much perfectly cast with each actor hitting all the right notes. Still like with most Shakespeare it will never match up to its source material but at least it goes for a fair balance between the theatrical and the cinematic.