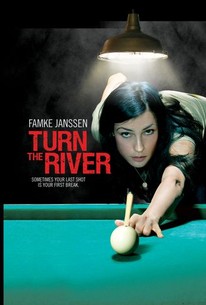 A woman struggles to win back the son she lost when she divorced her husband in a gritty drama that marks the directorial debut of actor Chris Eigeman. Kailey (Famke Janssen) is a woman who makes her living playing high-stakes poker and hustling pool, a trade she learned from her longtime friend Quinn (Rip Torn). Kailey's rough-and-tumble life drove a wedge between her and her husband, David (Matt Ross), and when they split up he won custody of their son, Gulley (Jaymie Dornan). However, while David was seemingly the sober and respectable one in their relationship, in truth he's a heavy drinker whose life is controlled by his wealthy, bullying mother, Abigail (Lois Smith). Gulley is unhappy living with David, and unbeknown to his father the boy has been corresponding with Kailey as they plan to start a new life together in Canada. However, Kailey is unable to get legitimate papers for herself and her son, so she heads to New York City to raise the 50,000 dollars she'll need to get passports on the black market. Turn the River also stars Marin Hinkle, John Juback, and Terry Kinney.

Lois Smith
as Abby
View All

Critic Reviews for Turn the River

Janssen, who reportedly did her own pool shooting, is [best] served in the scenes with Gulley, which are wrenching in a coolly understated way.

A well-acted, if not terribly well-crafted, character-driven drama without much in the way of a purpose.

Turn the River is a finely observed portrait of a desperate working-class woman who refuses to play by ordinary rules.

Turn the River lacks almost everything Eigeman has as a performer: charisma, wit and snappy delivery.

It's not sharp or ironic, but drab and downbeat. Unfortunately, it's also going to feel utterly familiar to those who've seen their share of independent dramas in the last 15 years.

Hopefully, more moviegoers will catch a performance as promising as this Turn in another rack.

A modest, grittily surfaced film that, while nothing earth-shaking, manages to hold your interest, despite its basic been-there/done-that premise.

captures the scant, fetid tone of broken down pool halls and cracked glass bars infested with third-rate hustlers and frat boys slumming for a hustle

No glamorized games here, just a bleak look at a bleak story of a woman trying to crawl her way up from a life of limited options.

It's a bumpy film, and though no one may see it, it's impossible to imagine it playing as gracefully, like its effectively open-ended finale, without Janssen's conviction to her role.

Turn the River, sometimes like Kailey herself and sometimes not, has a laudable habit of pulling back at the right moments and proving its mettle in unexpected ways.

Audience Reviews for Turn the River

Turn The River is a stupid story, that is poorly directed, and just plain boring. Kailey is a professional gambler who not only lost custody of her son when she got divorced, but also lost the right to even see him. She is convinced that he ex-husband is abusing her twelve year old son, the way he abused her, and she's determined to do the only thing she can about. Kailey goes on a quest to win as much money as she can, so she can get her son and take him away to a better place. First of all, we have no idea why Kailey can't see her son and we so no evidence of abuse by her ex-husband. Gambling, also infers random games of chance, but not with Kailey, honestly it's just ridiculous. The film stars X-men beauty Famke Janssen, who is quite good looking, but unfortunately very dry as an actress. Her son, Law & Orders Jamyie Dornan, is a bit more entertaining, but the role is so badly written, that no one could have made it work. A lot of things are alleged and assumed in this movie, but we aren't shown any of it. It's impossible to separate fact from bull shit, in this incredibly slow dud of a movie. The script is terrible, the acting is bland, and the direction is sloppy. If you suffer from chronic insomnia, try watching this!

Famke Janssen shines in this film!!! One of her best performances. The film reminded me of the film Trucker. Nice ensemble. I definitely recommend this film, especially cause of Famke's performance.

In "Turn the River," Kailey Sullivan(Famke Janssen, doing a fine Sandra Bullock impression) is a pool player who has been forbidden from seeing her 10-year old son Gulley(Jaymie Dornan) since he was born. However, that does not stop her from contacting him via a dead letter drop at a pool hall or meeting him in Central Park when she is in New York City. Lately, she has noticed Gulley's broken arm, ascribing this to his father(Matt Ross) and hatches a plot to run away with her son. The poorly directed "Turn the River" wastes a good cast in a failed attempt to capture the atmosphere of smoke-filled pool halls by going for a melodramatic premise that ends on a false note. I know that Gulley's father is quite possibly abusive but Kailey is not the solution, even though the movie tries in vain to make her sympathetic.(Since when do criminal lowlifes do anything without getting paid beforehand?) Even if she had come up with a way that is not half-baked to get her son, her parenting skills leave something to be desired since she is pure impulse, uncontrollably twitching when a game is not imminent.(Gulley probably finds her coolness and lack of responsibility refreshing.) And even with a full explanation at the end, I still do not exactly buy the story as to how Kailey and Gulley met.

An incredibly slow drama that has a good point where right is meant to be right regardless of the hard times people face, in relationships where the children are held as pawns in their insecurities..See this if you want a drama the surrounds you in afterthoughts of all kinds....