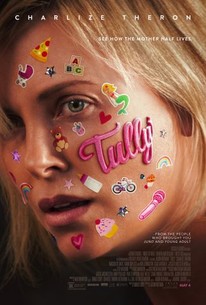 Critics Consensus: Tully delves into the modern parenthood experience with an admirably deft blend of humor and raw honesty, brought to life by an outstanding performance by Charlize Theron.

Critics Consensus: Tully delves into the modern parenthood experience with an admirably deft blend of humor and raw honesty, brought to life by an outstanding performance by Charlize Theron.

Critic Consensus: Tully delves into the modern parenthood experience with an admirably deft blend of humor and raw honesty, brought to life by an outstanding performance by Charlize Theron.

A new comedy from Academy Award (R)-nominated director Jason Reitman ("Up in the Air") and Academy Award (R)-winning screenwriter Diablo Cody ("Juno"). Marlo (Academy Award (R) winner Charlize Theron), a mother of three including a newborn, is gifted a night nanny by her brother (Mark Duplass). Hesitant to the extravagance at first, Marlo comes to form a unique bond with the thoughtful, surprising, and sometimes challenging young nanny named Tully (Mackenzie Davis).

As a portrayal of postpartum depression, Tully is a success-simplistic at times, but an admirable gut-punch nonetheless.

The emotions Tully surfaces aren't comforting, and they have less to do with the actual realities of motherhood than with the idea of motherhood as something that leaves you forever changed and cut off from your younger self.

It's a slight story enlarged to universal dimensions by the sharpness of Cody's dialogue and the acuteness of her insights into the domestic pile-up that constitutes Marlo's day.

For those with an appetite for an early-summer movie with heart, but no costumes, "Tully" will take care of them, too.

Tully fails on every level except one: Charlize Theron wakes it from its lethargy, takes it by the jugular, and squeezes until it yells.

Tully is a walking film script, and the best thing that can be said about the film is that a group of very talented actors works very hard to make its contrivances pass as plausible.

Tully is all about the problems of excessive expectations of perfection thrust upon women in general and mothers in particular. Once you watch it, you're going to want to do something nice for your mom.

There's so much to learn and value in seeing the film; I appreciated the fact that a troubled mom did seek help, I'm just not sure the script needed the plot twist.

Tully brings to unvarnished life that being a mom isn't always magical.

You don't have to be a parent to enjoy Tully. We've all been a parent or a child -- and this film is really about how we take care of ourselves, and each other.

Similar to her work in Juno, [Diablo Cody] offers a brutally honest tale about the struggles of motherhood rather than hide behind the illusion of a perfect family life.

Charlize Theron gives such a commanding, blistering, and raw performance.

Tully makes it obvious that it isn't trying to sugarcoat the realities of motherhood. In fact, the film is so realistic, mothers might feel it hits too close to home. It's admirable, however, and terrific director Jason Reitman, who delivered the superior and more balanced films Juno and Up in the Air, delivers this intimate but very straight-minded drama with a muted sensibility. Mackenzie Davis and Charlize Theron shine, however, the film unravels a bit when it throws in a rather underdeveloped twist that takes a turn for the bitter. It ends the film in a rather sour note, and upon further thought reflects the themes of the film rather messily. Still, Tully will mean a lot to mothers and to those who ever have underestimated the difficulty of being one. Rating: 72

Here is a decent film that seems to be in desperate search of a conflict (any conflict, at each and every turn) to justify its existence, so much that it simply comes up with an implicit twist in the end to sound profound - a twist that actually does work despite, well, being a cliché.

Although he has had a few missteps in my personal opinion, director Jason Reitman has always had a soft spot in my heart, at least in terms of how much I love his movies. Say what you will about how Juno holds up nowadays, but I still find that to be a fantastic picture, as well as thinking that Up in the Air may be one of my favourite films, period. His most recent outing in Tully has finally hit the big screen and I can pleasantly say that he has another great on his hands. This is a film that markets itself as a movie about a mother who struggles to deal with her children, and while that's definitely the setup, there's so much more under the surface. Here's why I believe Tully is worth checking out. Following Marlo, as she has already had a difficult life dealing with two children that aren't exactly perfect, she is now burdened with having a newborn as well. With her kids not really seeing life properly and her newborn reminding her of the times that she thought were behind her, she hires a night nanny to take care of her baby as she sleeps. This sparks into them having a nice relationship and some pretty incredible interactions come about. This is a very dialogue-heavy movie, but it's not riddled with too much backstory or exposition. These are two characters that you will more than likely grow to love throughout the movie and their arcs are more than paid off. Charlize Theron has always been a standout performer and her role as Marlo is absolutely no exception to that notion. The way she devotes herself to being this mother and making you believe she might have gone through scenarios throughout her real life was nothing short of inspired acting. That being said, Mackenzie Davis has been known for her work on many indie films and breaking out in last year's Blade Runner 2049. Their chemistry was magnetic and since their scenes together take up more than half of this movie, I was glued to the screen from beginning to end. Each character was given the perfect amount of exploration to make you feel a certain way about them. For myself, it all comes down to the writing and direction of a film like this. Yes, scores, editing, and cinematography (as well as many others) all play an important role in every film, but a film about raw human emotion truly comes down to the dialogue and performances. If you can't buy into what these characters are saying to each other or where they are at the beginning of the film in comparison to its conclusion (emotionally), then the movie will have lost my complete attention immediately. This is the type of film that knew how to perfectly cast its characters and flesh out a story that feels earned by the final few scenes. Tully is a film that is full of surprises throughout its third act. Whether it's a specific character decision or a literal shocking moment, this is a film that doesn't shy away from the harsh reality of real life. Theron and Davis are both incredible here and appearances by Mark Duplass and Ron Livingston can't ever hurt your film either. I can see where some viewers may be turned off completely during a specific moment in the final act, but if you are able to immerse yourself in the scene itself and looking back on the entire movie, I promise that the payoff will feel earned. Tully is riddled with impressive aspects and I can't talk highly enough about it. I have my issues here and there, but it's more than worth your time. Fantastic movie.