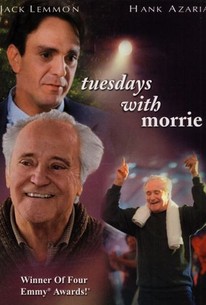 Detroit Free Press sports columnist Mitch Albom (Hank Azaria) has found success and popularity in his occupation, but emotionally and spiritually he is bankrupt. While watching television one night, he comes across an episode of the news showNightline and learns that his former university professor Morrie Schwartz (Jack Lemmon) is battling A.L.S. -- better known as Lou Gehrig's Disease. At first, Mitch is reluctant to pay his former mentor a visit, since, at his graduation ceremony, Mitch promised to remain in contact with Morrie but failed to make good on that promise. Mitch eventually overcomes his uneasiness and, to his surprise, finds a very warm welcome from Morrie. The two begin to discuss the issues of happiness, life, and death, and they soon begin to meet on a weekly basis as Mitch reassumes the role of Morrie's student.

Critic Reviews for Tuesdays With Morrie

Movie of the week with film caliber performances

Audience Reviews for Tuesdays With Morrie

I liked it. Of course I was crying, but I felt that it wasn't trying to make me cry which I really liked. I thought it was a very nicely done film.