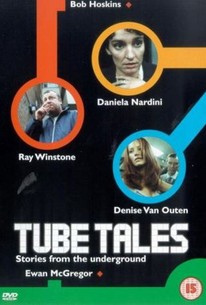 This omnibus film is both a tribute to 1990s Cool Britannia and an opportunity for many of Britain's best actors to step behind the camera. Set in the London's underground (AKA the Tube), the film's nine shorts depict England's most hallowed form of public transportation in wildly divergent manners, from gritty to surreal. Jude Law's "A Bird in the Hand" is a quietly affecting tale about an ailing old man, while "Horny", by Stephen Hopkins is an extended sexual fantasy imagined by a sweaty commuter enduring both the dog days of summer and his obvious arousal. Ewan MacGregor's "Bone" is a fanciful tale about a trombonist and his imagined lover on their way home from a concert, while Bob Hoskins' "My Father the Liar" is an emotionally powerful tale about a child who witnesses a suicide. But perhaps the standout segment from this film is Armando Iannucci's uproarious "Mouth", featuring a beautiful, poised woman vomiting on her fellow commuters set to Bruckner's 9th Symphony. Frank Harper appears in a number of these short works as an overly officious subway staffer. This film premiered at the London Film Festival and was later showed on the UK's BSkyB cable channel.

Allan Miller
as [A Bird In The Hand]

Tom Watson
as The Son

Ray Winstone
as The Father

Matthew Xia
as Boyfriend
View All

There are no critic reviews yet for Tube Tales. Keep checking Rotten Tomatoes for updates!

There are no featured reviews for Tube Tales at this time.