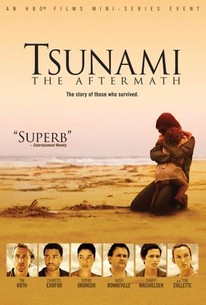 From HBO and director Bharat Nalluri comes this fictionalized miniseries account of one of the deadliest natural disasters in human history, the 2004 Indian Ocean tsunami that killed 300,000 people in Indonesia and other nearby nations. The effects of the tragedy are examined through an ensemble of characters from varying walks of life, including a journalist, a government worker, and a meteorologist. Starring Tim Roth, Toni Colette and Chiwetel Ejiofor, Tsunami: The Aftermath received three Golden Globe nominations.

Will Yun Lee
as Chai

Critic Reviews for Tsunami, The Aftermath

The personal stories in Tsunami: The Aftermath are poorly written and are only loosely based on survivor stories.

Of none of the victims of these killer waves could it be said that their character was their fate. Whoever they were, they didn't deserve it.

Audience Reviews for Tsunami, The Aftermath

A number of family tragedies encountered by Thailand natives and tourists as the '04 tsunami disaster set into the coastal shores of the Indian Ocean. Ejiofor, Roth, Collette and Bonneville give great performances to gain credibility to the touching family, journalist, and diplomatic drama within. The original flooding video shot by a real-life tourist ('04) is seamlessly spliced into the wave scene. Although its an HBO film, it's better than a Hollywood production.