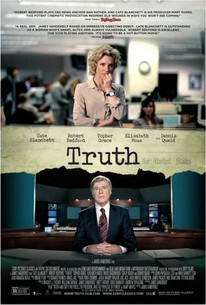 On the morning of September 9, 2004, veteran CBS News producer MARY MAPES (Cate Blanchett) believed she had every reason to feel proud of a broadcast journalism job well done. By the end of the day, Mapes, CBS News, and the venerable CBS News anchor DAN RATHER (Robert Redford) would be under harsh scrutiny. -- (C) Sony

Robert Redford
as Dan Rather

Nancy Denis
as Woman in Bakery

Eliza Logan
as Emily Will

On DVD This Week: Bridge of Spies, Suffragette, Show Me a Hero, and More
Now Streaming: The X-Files, Fear the Walking Dead, Fargo, And More
Dave Navarro’s Five Favorite Films

As a case study in journalism and ethics, the film is intriguing. As drama, it stutters.

The casting cannot save a slightly ho-hum story that crosses the Atlantic badly.

This is one of Blanchett's best performances on film - and that is saying something. Mapes is both ordinary and heroic here, which will, of course, upset those who think she is just a left-wing hack.

Ultimately, some of the answers in "Truth" are unsatisfying, but it asks important questions, which is one of journalism's chief responsibilities.

Condescending, self-righteous and sloppy, Truth is simply a bad film for which there are no excuses.

It's a solidly-made movie, but you may come away from it wondering who, if anyone, has a claim on truth in the 21st century.

Truth boasts another juggernaut by Cate Blanchett that is buoyed by an incredibly strong adaptation of [Mary] Mapes' book, eliciting all the intricate minutiae and ethics of not only investigative journalism but the absurdity of corporate blinders.

[James] Vanderbilt directs the feature with class and a keen eye for detail, while his screenplay is excellent and consistent throughout.

While it's not flawless, having Robert Redford and Cate Blanchett onscreen should make us curious at least to see and hear the Truth.

A great and authentic thriller regarding journalism in its most relevant century. [Full review in Spanish].

Even if Truth hadn't opened in the same year as Spotlight, its superficial grandstanding about rigged systems and agendas would feel like a production staffed by understudies.

Like other similar films such as Fair Game and Spotlight, this is an intelligent political drama full of revealing nuances and centered on an exquisitely-written dialogue, and it benefits from an excellent ensemble cast, especially Cate Blanchett in an outstanding performance.

While it's compellingly told, Truth is a liberal whitewash of one of the biggest modern journalistic scandals in America. Based on the memoir of former CBS producer Mary Mapes, the film follows Mapes and her investigative team during the 2004 election as they look into and report on alleged improprieties by President George W. Bush when he was serving in the Texas Air National Guard; but the story and its "evidence" are quickly debunked, leading to a number of firings and the resignation of news anchor Dan Rather. Featuring Cate Blanchett, Robert Redford, Topher Grace, Dennis Quaid, and Elisabeth Moss, the cast is quite impressive and delivers some very strong performances. And the writing does a good job at building tension and suspense as the Guard story comes together and then falls apart. However, the film only briefly addresses the gross negligence and shoddy journalism of the team, along with Mapes' personal political agenda, and ultimately it surmises that the ends justify the means; that what's most important is asking questions. Yet despite the heavy handed politics (and conspiracy theories) in the last act, Truth is an engaging docudrama.

Cate Blanchett shores up this pretty darn good drama about political corruption and the news people that report on it. Prior to Bush the 2nd's second election a producer for 60 Minutes discovers proof that the boy chief of privilege skipped on duty in Vietnam (which the vast majority of American illiterati viewed as a Huck Finn style minor offence). Blanchett et al do a beautiful job conveying at first victory and then dread as the secret hand of power reaches out from the darkness to extinguish their voice. Redford is restrained and properly so as Dan Rather. A great viewing experience.

WHERE'S THE PIQUANCY, KENNETH? - My Review of TRUTH (2 1/2 Stars) Some quick takeaways I learned by watching TRUTH, the feature debut from ZODIAC writer James Vanderbilt based on Dan Rather's 60 MINUTES producer Mary Mapes' book Truth and Duty: The Press, the President, and the Privilege of Power: Liberals really do get a kick out of trying to take down conservatives, whether they're willing to admit it or not. Said liberals can be the same sanctimonious windbags as their counterparts. Dan Rather flew coach! In 2004, Mapes and Rather took on the story of exposing then-President George W. Bush's questionable Texas Air National Guard service record. The idea Bush may have shirked his responsibilities could have cost him the re-election, but instead cost Rather and Mapes their careers. This is rich material for a film, yet Hollywood being Hollywood, everything is laid on a little too thick with that tired "We Have A Lesson To Teach You!" attitude. TRUTH so very desperately wants to be ALL THE PRESIDENT'S MEN, but misses the mark because it lacks its great predecessor's icy veneer. Both take clinical, methodical approaches to digging into a story, but TRUTH needs to shout its themes over and over again, whereas ALL THE PRESIDENT'S MEN opted for quiet steadfastness. Cate Blanchett, who clearly struck gold in BLUE JASMINE and will stick to that formula again, thank you very much, still manages a strong, vibrant turn as Mapes. Troubled by her father's disapproval and clearly energized by the idea that she may be able to take down a president, Blanchett is equal parts vulnerable and ferocious. I especially enjoyed her strength when facing off against the Republicans at her hearing. Blanchett excels when things start to take a ominous turn and she slowly realizes it's a losing the battle. Redford as Rather is another story entirely. While he admirably looks and speaks the part, his character is written as such a beatific father figure to Mapes that they left out the crazy. Redford certainly seems game, and it's an affectionate turn, but the real Rather had apparently lost his marbles here and there. Some of that truth would have been welcome. What can you expect, however, from a book that revered her boss? Alongside our leads, we're treated to Mapes' entourage of journalists, including Dennis Quaid, Topher Grace and Elizabeth Moss, who sadly, is given absolutely nothing to do. Quaid has his bright moments, but Grace is saddled with the Young Turk role who gets to shout the themes of the movie as loudly as possible. Yes, we should be angry that Bush apparently used his privilege to avoid service in the Vietnam War, and yes, has pretty much destroyed the world...but that doesn't make for REAL TRUTH. People tend to control their anger and let it out in more subtle, more interesting ways. A story as important as this one becomes a turn off when Hollywood has to shove it down our throats. Just a little bit of restraint and a little more crazy, and TRUTH could have stood proudly beside its great predecessor instead of being a pretty good variation of ABSENCE OF MALICE.