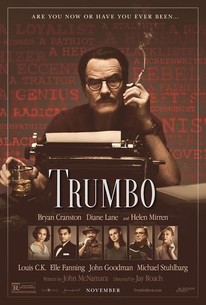 Critics Consensus: Trumbo serves as an honorable and well-acted tribute to a brilliant writer's principled stand, even if it doesn't quite achieve the greatness of its subject's own classic screenplays.

Critics Consensus: Trumbo serves as an honorable and well-acted tribute to a brilliant writer's principled stand, even if it doesn't quite achieve the greatness of its subject's own classic screenplays.

Critic Consensus: Trumbo serves as an honorable and well-acted tribute to a brilliant writer's principled stand, even if it doesn't quite achieve the greatness of its subject's own classic screenplays.

In 1947, Dalton Trumbo (Bryan Cranston) was Hollywood's top screenwriter until he and other artists were jailed and blacklisted for their political beliefs. TRUMBO (directed by Jay Roach) recounts how Dalton used words and wit to win two Academy Awards and expose the absurdity and injustice of the blacklist, which entangled everyone from gossip columnist Hedda Hopper (Helen Mirren) to John Wayne, Kirk Douglas and Otto Preminger.

Richard Portnow
as Louis B. Mayer

Wayne Pére
as Next Door Neighbor

Griff Furst
as Master of Ceremonies

The film is a labour of love for Bryan Cranston, as Trumbo. As Hollywood's greatest screenwriter, embattled but not beaten, he embodies the old Hemingway definition of courage: "grace under pressure".

One day, perhaps, an HBO mini-series will tackle this cultural face-off and blow our minds. In the meantime, check out Trumbo.

Fast, funny, if a little flimsy.

The film itself is very uneven. Any texture, depth and pathos here resides in the central performance.

Cranston is good, very good, here, but let down by a meandering drama that lacks cojones.

Cranston is superb. The Breaking Bad actor, in best form, is an attack dog: he goes at lines like a mutt at a mutton bone.

Trumbo should serve as a warning that history can repeat itself, and our freedom of speech is always in jeopardy.

Construction flaws aside, the film manages to be both breezy and scathing precisely when it needs to be. This is due to a delightfully evocative production design as well as some exceptional performances.

It would probably please Trumbo to hear a critic say Trumbo would have been better had Trumbo written it himself.

Stand up and cheer for Trumbo! Under Jay Roach's direction with an Oscar-worthy script from John McNamara...Trumbo celebrates the 1st Amendment and the conviction of one man, with dignity, integrity, courage, bravery and intelligence.

Overall, Trumbo benefits from the character-driven performance of Cranston, but the script and direction doesn't match in terms of quality.

Very entertaining look at the Hollywood era of blacklisted communist artists and how one of the biggest writers of the time dealt with it. There are some slow parts, but especially the (perfectly cast) stars of the time showing up make for some really fun scenes. Cranston's charisma easily makes for a relate-able protagonist, who is easily forgiven for his quirks, while his struggle against oppression makes for a very engaging story. The ending is particularly satisfying.

It doesn't matter how cinematic or worthy of being told a real story is (which is the case) when it is made into an ordinary, uninspired biopic full of clichés and one-dimensional characters - and it is even worse that it looks like a cheap TV movie made by an obviously mediocre director.

"Trumbo" benefits from exceptionally good acting from Cranston, and good performances by Fanning and Lane, as well as a compelling story, sets and costumes. Otherwise, there is not much more to the film than your standard, well-worn film. It is timely, to be sure -- but it offers little beyond its message and moments of well-chewed wisdom.

Bryan Cranston is just such a very good actor. He utilizes his entire being - voice, eyes, mouth, shoulders, gut, hands, feet - to create a multifaceted performance. "Trumbo" is the maddening story about the unconstitutional witch hunt of suspected communists and communist sympathizers during the Red Scare. Hollywood ghostwriter of "Roman Holiday" Dalton Trumbo and friends face persecution, job loss, imprisonment, prejudice, and harassment for committing the crime of taking the 1st Amendment literally. The script hits all the intellectual and emotional highs and lows (though sometimes a bit too abstrusely), and the historical context surrounding the blacklist (post-WWII and pre-civil rights movement) are nicely evinced. The splicing together of modern actors into grainy black and white footage is also very cool. The performances are all strong, especially Cranston and Michael Stuhlbarg (whom I could not place for the life of me, but now realize, played the titular serious man in one of the first Coen Brothers' movies I ever liked) as the stocky, noir antihero in life and art, Edward G. Robinson. A recurring continuity error that really grinded my gears though was the awkward aging, namely the random and sudden swapping in of giantess Elle Fanning as middle daughter Nikola (great name, though) while the babyfaced eldest brother looks exactly the same. Then later when the eldest brother is portrayed by an older actor while Elle Fanning looks exactly the same. Then Alan Tudyk and Diane Lane looking exactly the same thirty years later, though let's be honest, Lane will never age. And of course, Elle Fanning in a brassy red, Jackie O-style blowout reminiscent of the horrible age make-up job for Bonnie Wright as thirty-five-year-old Ginny Weasley. Why, future? Why?