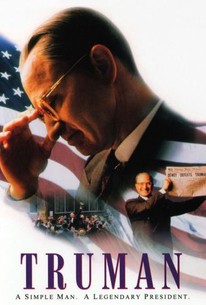 This award winning made-for-cable movie tells the story of American President Harry S.Truman and his role in the second World War. Gary Sinese stars in the title role of this biographical account, which is based on Pulitzer Prize-winner David McCullough's book. The film chronicles Truman's rise from unknown farmer to infamous American President -- who is chiefly remembered for being the first to use the atomic bomb. Diana Scarwid stars as Truman's wife Bess. Nominated for many awards that year, the film won the Emmy for "Best Made-for-Television Movie." Gary Sinese won the "Best Actor" Golden Globe and the Screen Actors Guild award for his impressive lead performance.

Jerel Taylor
as Barnett
View All

An excellent biopic anchored by a marvelous job by Sinise.

Its Cliffs Notes approach to the source biography gets a big boost from star Gary Sinise.

Truman succeeds at being a comprehensive, well acted, informative, and generally well written biopic. Undoubtedly the portrayal of Truman was too charitable, but the level of humanity that Gary Sinise was able to inject really carried the film throughout. I would have liked to see the more aggressive side of Truman, and some of his internal political battles with his own party, but for its running time, Truman manages to cover a lot of ground, and does so in a largely effective way. 3.5/5 Stars