True History of the Kelly Gang2020 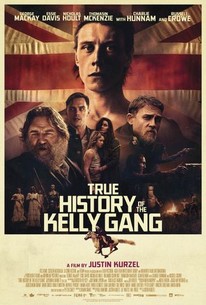 Critics Consensus: Its unusual approach won't be for all viewers, but True History of the Kelly Gang takes a distinctively postmodern look at Australia's past.

Critics Consensus: Its unusual approach won't be for all viewers, but True History of the Kelly Gang takes a distinctively postmodern look at Australia's past.

Critic Consensus: Its unusual approach won't be for all viewers, but True History of the Kelly Gang takes a distinctively postmodern look at Australia's past.

Set against the badlands of colonial Australia where the English rule with a bloody fist and the Irish endure, Ned Kelly (George MacKay) discovers he comes from a line of Irish rebels called the Sons of Sieve, an uncompromising army of cross dressing bandits immortalized for terrorizing their oppressors back in Ireland. Nurtured by the notorious bushranger Harry Power (Russell Crowe) and fueled by the unfair arrest of his mother, Ned Kelly recruits a wild bunch of warriors to plot one of the most audacious attacks of anarchy and rebellion the country has ever seen.

News & Interviews for True History of the Kelly Gang

The Indie Fresh List: A High School Scandal, a Kung Fu Legend, and an Australian Outlaw

View All True History of the Kelly Gang News

Critic Reviews for True History of the Kelly Gang

Those who enjoy gritty, angry Westerns (especially those set in the Australian bush rather than along the American frontier) will find much here to their taste, none of which is in need of additional seasoning.

There's a texture and a muck that are so tangible that they really put you in the middle of this film. You can taste it and you can smell it.

This is myth-making, splattered in blood, scored with an electric guitar, and enacted with such brazen bigness that you wouldn't be surprised if the cast assembled for a curtain call at the end.

But for all its real visual flair, it's hard not to feel that the film misses something crucial about Kelly in the end - trading machismo for manhood, and sensation for true history.

Kurzel's film doesn't simply show us the shattered masculinity and class rage that fueled Kelly's infamous late 19th-century crime spree, it shoots that energy outward like sparks from a forge.

"True History of the Kelly Gang," for its part, strikes just the right balance of scary and crazy, and it subjects both to an impressive measure of discipline.

Neither true nor history, this flight of fantasy has too few moments of excitement buried in the taxing rhetoric.

The truth is not something to be cherished in this fictionalized biopic.

The film is violent, absorbing, and a must for any western fan. Beautifully shot by cinematographer Ari Wegner. The cast is first-rate.

In trading the American frontier for barren branch graveyards and facts largely for fiction, this stylized folk tale is patched together by the same needles that weave myths.

A stylish and visceral film that questions the veracity of the myths and legends that are part of every nation's history. [Full Review in Spanish]

How True History of the Kelly Gang broadens what we mean when we say the word "outlaw" is another step forward for Justin Kurzel in his cinematic investigation of what makes a man.

There are no featured reviews for True History of the Kelly Gang at this time.