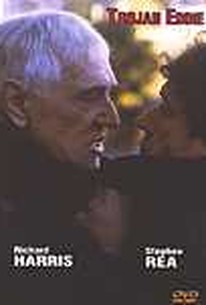 Set in Ireland, this beautifully rendered drama offers a fascinating portrait of a nomadic peddler who travels about the countryside selling housewares from his van. Trojan Eddie's unusual moniker comes from the logo upon his van. He works for John Power, the owner of several such traveling vans. Eddie, who is married with two children (and a mistress), wants to own his own business but lacks the means. He has just spent time in prison on robbery charges and now works as a partner with Dermot, Power's nephew. Power (the story's protagonist) attempts to deal with his overriding passion for the glorious traveler Kathleen. Trouble comes when Dermot tries to steal Kathleen from his uncle. ~ Sandra Brennan, Rovi

This highly atmospheric film vividly brings to life the tensions and animosities of the traveller culture in rural Ireland.

It is worth seeing for the tremendous performances by the lead players .

There are no featured audience reviews yet. Click the link below to see what others say about Trojan Eddie!