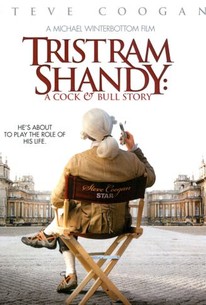 Critics Consensus: Steve Coogan and Rob Brydon add madcap, knowing performances to the mix, and the result is a fun, postmodern romp.

Critics Consensus: Steve Coogan and Rob Brydon add madcap, knowing performances to the mix, and the result is a fun, postmodern romp.

Critic Consensus: Steve Coogan and Rob Brydon add madcap, knowing performances to the mix, and the result is a fun, postmodern romp.

Flipping back and forth between the 18th century and the hapless efforts of the 21st century filmakers, 'Tristram Shandy' is the making of a movie adapted from the notoriously unfilmable English literature masterpiece, 'The Life and Opinions of Tristram Sahndy, Gentlemen,' written by Laurence Sterne. The story begins with Tristram Shandy (Steve Coogan) narrating his life story as he sees it. Crammed with literary jokes and dark humor, Shandy's warped childhood tales are constantly interrupted by his family and household, inadvertently revealing far more about himself than any conventional autobiography. At the dramatic moment of Tristram's birth, the first assistant director calls cut, marking the end of a filming day on the. We then see Steve Coogan, the other actors and crew through the course of a chaotic evening on set. Steve Coogan's wife arrives with their six-month-old baby, a journalist is chasing him about a scandalous story, his agent has arrived with a load of Hollywood scripts and the film financiers are threatening to pull the plug.

Kay Richardson
as Barman
View All

Coogan may be game and there are plenty of nods to assorted sexploits, but this riffing on his caddish public image was done a lot more amusingly and a lot less smugly in a 10-minute skit in Jim Jarmusch's Coffee and Cigarettes.

Tristram Shandy: A Cock & Bull Story is a hall of mirrors that doesn't tease the brain (it's easier to watch than to read about) so much as goose it into submission.

A Cock and Bull Story is a grand giggle of a film, well worth your time and money and a game well played for the audience.

A hilariously clever picture about the making of a movie that no one will have the slightest interest in. For an experiment about an experiment, it's entirely too much fun.

A Cock and Bull Story is an admirable effort, but an ultimately disappointing one.

... it's a great deal of sheer fun, showcasing Coogan as one of the best comic actors working today.

Films where you suddenly hear yourself laughing, where you leave the theatre a little weakened by the violence of your own hilarity, are extremely rare.

Stands alongside -- if not above -- Adaptation as one of the best films about the process.

Director Michael Winterbottom may not have proved that you can film this unfilmable book, but he definitely proved he can film a funny movie about trying to film it.

'Tristram Shandy' is a great deal less clever than it thinks it is.

Having seen and fell in love with The Trip first, it was fun to spend more time with characters that I had come to know and love. On top of being a smart and layered film, Coogan and Brydon continue to give the audience their patented witty passive-aggressive banter. While I did not find myself sick with laughter in the same ways as i was with The Trip, it is still very funny. If you love the characters in all of their humor and misery, then this film is for you.

When did British comedy become boring? My guess. Sometime around this film's release. There's an average human drama subplot, but the rest is pretty stuck up [their own a***] comedy.

your mileage may vary according to your taste in 18th century literature, british comedy and/or the post-modern film stylings of michael winterbottom/steve coogan. i enjoyed it very much, tho it's messy and not everything works. one clever bit, amongst many clever bits, was the score's subtly referencing everything from barry lyndon to 8 1/2, perhaps an allusion to the many charges of plagiarism against the novel