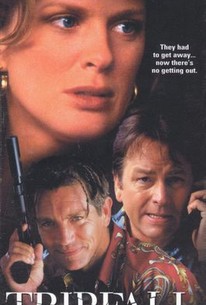 In a sterling example of heeding your mother's warning about not talking to strangers, soft-bellied yuppie Tom Williams (John Ritter), his striking wife Gina (Rachel Hunter), and their kids are abducted while on vacation at a Southern California amusement park by the unctuous Mr. Eddie (Eric Roberts) and his colorful henchmen. After several sequences demonstrating how awfully sincere Mr. Eddie is about slaying the family, and with the rest of the clan duct-taped in the back of a van, Tom escapes -- but is at a loss as to how to pull off a rescue. In the end he proves he's no ordinary hero.

Deborah Ostrowsky
as Victim
View All

There's no denying it, this is hopeless stuff.

There are no featured audience reviews yet. Click the link below to see what others say about Tripfall!