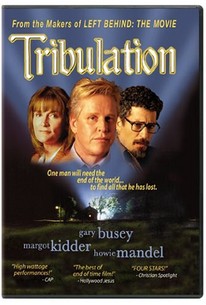 A cop used to chasing bad guys finds himself up against the ultimate villain of all time in this Christian-themed thriller. Tom Canburo (Gary Busey) is a police detective whose work doesn't leave him with much room in his life for the intangibles of faith. Tom's sister, Eileen (Margot Kidder), however, is a born-again Christian who often attempts to engage her brother in discussions of spiritual matters, while his brother-in-law, Jason (Howie Mandel), embraces a puzzling melange of New Age teachings. One night, Tom's life seems to take a left turn into the unknown; he gets a call from Eileen, saying that Jason has tried to kill her, calling her a "hater," while in the course of an investigation, Tom uncovers a bizarre underground cult with supernatural powers. As Tom tries to escape, he gets in a severe auto accident and drifts into a coma. Several years later, he comes to and finds himself in a strange new world. Franco Macalousso (Nick Mancuso), a New Age philosopher who spoke of bringing peace to the world, is now the most powerful man on Earth, and under his leadership everyone must have their right hand marked with the number "666" -- those who refuse have their hand cut off. Christians are also persecuted as "haters," and Helen Hannah (Leigh Lewis), the leader of a Christian resistance group, has become Public Enemy Number One. Also released as Apocalypse III: Tribulation, Tribulation was the third film from screenwriters Paul Lalonde and Peter Lalonde inspired by modern-day interpretations of biblical prophesy. ~ Mark Deming, Rovi

There are no critic reviews yet for Tribulation. Keep checking Rotten Tomatoes for updates!

There's so much awesomeness in this film that I don't even have the words to describe it...gary busey, the day of wonders, nick mancuso as the antichrist, pre-deal or no deal-down and out howie mandell, margot kidder!