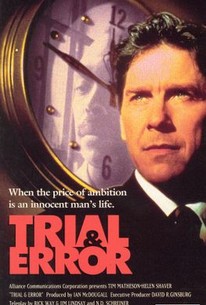 Tim Matheson plays a zealous prosecutor named Peter Hudson in the made-for-cable thriller Trial and Error. After sending a petty criminal to death row, Hudson pursues a political career, eventually becoming attorney general. Just before he is to be nominated for Lieutenant Governor, the criminal is about to be executed, and due to his wife's beliefs Hudson starts to suspect that the man was innocent. Hudson doesn't want to pursue his suspicions, since his political career is at stake. However, he is forced into action when the real killer begins stalking his wife.

Brian Kaulback
as Guard
View All

Some suspense turns up in the final 30 minutes, but Trial and Error leans to the preposterous for effect; some will buy into the tired concept.

There are no featured reviews for Trial & Error at this time.