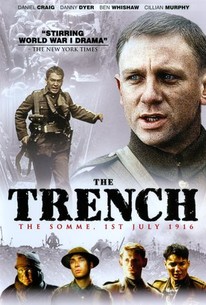 This dramatization of the 48 hours leading up to the Battle of the Somme in 1916 underscores the bitter loss of innocence of a group of idealistic young men, including 17-year-old Billy Macfarlane who's enlisted in order to be with his older brother, Eddie. But Eddie's sent home after being wounded, leaving his innocent brother behind to face the slow, inevitable countdown to the bloodiest massacre in British military history.

Critic Reviews for The Trench

Audience Reviews for The Trench

Well made but overly soapy WWI drama featuring the usual mix of niave young recruits, hardened veterans and foppish officers who bond/squabble until the inevitable anti-war based conclusion.