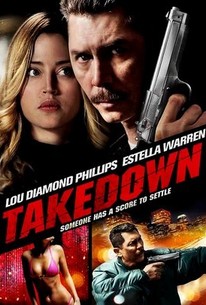 Five years after failing to save his daughter from a vicious attack, grieving father David (Lou Diamond Phillips) gets a second shot at redemption by rescuing a desperate young girl who has fallen victim to a nefarious human trafficking operation. In the wake of his daughter's murder, David turned his back on the past and closed himself off from the world. Then, one day, while working as a security guard and performing a standard inspection on a truck, David happens across a terrified young Serbian girl who has been abducted by human traffickers who brutally slaughtered her sister. Now David is determined to save the terrified young girl, but the fight he is about to wage could very well be his last. After placing the girl in the care of a woman's refuge specialist, David prepares to strike at the heart of the organization and prevent it from destroying the life of another young innocent. ~ Jason Buchanan, Rovi

There are no critic reviews yet for Takedown (Transparency). Keep checking Rotten Tomatoes for updates!

There are no featured reviews for Takedown (Transparency) at this time.