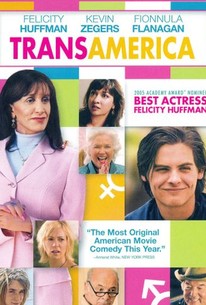 The first film by Duncan Tucker, Transamerica stars Felicity Huffman as a pre-operative transsexual named Bree (whose given name was Stanley). One week before going under the knife, Bree learns that she fathered a boy who is now 17 and is in trouble with the law. Bree would like to ignore this information, but is forced to meet the young man, Toby (played by Kevin Zegers), by her analyst Margaret (Elizabeth Peña), who will not allow the surgery to happen unless Bree meets him and confronts this aspect of her past. Upon meeting, the son believes that Bree is simply a do-gooder. She buys a car and the two road-trip back to her home in Los Angeles, Bree all the while attempting to keep from Toby the truth of the situation. ~ Perry Seibert, Rovi

It's a very likeable film. With a big heart, good intentions and a sharp eye for social absurdities, it can hardly be anything else.

It's funny in spots, touching in others and uniformly life-affirming.

Huffman's performance redeems parts of the movie but, until the final 30 minutes, Transamerica too often feels like a journey to nowhere.

Transamerica is a routine road-trip comedy-drama with a twist.

Huffman's performance in Transamerica, as a pre-op male-to-female transsexual coping with the sudden emergence of a long-lost son, is much better than the movie it's in; indeed, she singlehandedly takes Transamerica to a higher plane.

The filmmakers' priority was to tell a good story: their commitment was to a movie, not a movement. In truth, they did honor to both.

Huffman and Zegers have the off-kilter chemistry needed...

A so-so film that features a fantastic performance by Felicity Huffman.

Bree was, and still is, an identifiable character in a movie that has aged well; credit for this lands solely in the lap of Felicity Huffman for her ability to turn a potentially clown-like depiction of a Trans woman into a loving mother.

... ultimately, it is about the primacy of family and friends, and how decency begets decency.

Huffman's performance is the reason to see this sensitive, and sometimes touching drama. Paul Chambers, CNN.

"Transamerica" is really the first film to truly focus on the journey of a transsexual, while also dealing with a complex story filled with interesting characters, and on top of that using a frame narrative of a road trip. The transformation made by the main character not only remains inspiring for the audience, but was also bittersweet when watching the stagnant life built around Bree (Huffman) and what becomes of her in the end of the film. The characters are also varied and complicated, from her therapist to her biological son (Zegers), who she road trips with from New York to Los Angeles. Bree is a pre-op transsexual who has just found out she has a son by the one girl she had sex with before starting her transformation into a man. Her son lives a life as a recluse and drug addict in New York City, prostituting himself and dreaming of a day that he can go live with his real father out in Hollywood. Abused and worse for wear Toby (Zegers) meets Bree, who works under the guise of a church patron in order to get Toby to go with her and find him a home before her therapist will sign off for the surgery. Bree finds herself really living for the first time since her journey began, and by the end she has found something out about herself, as well as found herself able to understand what it is to be a parent and love another person with abject affection. Felicity Huffman, in the title role, gives one of the most inspired performances of the decade, and really delves into the world of transsexuality, as well as educates through example. Bree is a strong, suitable character for those who want guidance. Besides this being a prime example of an iconoclastic LGBTQ character, Bree is also a remarkably flawed and interesting character. The entire film works as both an intense voyage into the relationship between an estranged father and son, as well as a coming of age story, as well as a story about the surgery of a transsexual. It's a rich story that explores a lot of great themes and has a diverse roster of characters, so it's enjoyable as well as introspective, which makes it a great film regardless.

Lovely movie. Huffman was awesome as the sensitive Bree. Interesting how they chose a woman for the part instead of a man, but it totally worked. I like how the emphasis isn't on the transgender theme, but in growing as a person and connecting with other people.

Transamerica, an unconventional road movie, to say the least, hits more than it misses, but for a supposedly boundary-breaking film, I found that it only scratched the surface of the kind of story it's trying to tell (man meets the son he didn't know he had and son meets father, but father looks and acts and feels like a... mother, I guess?). What I liked about this film was that it was very realistic in its way. I think what I didn't like was the pacing. The film stood by a lot of road movie clichés in its first half, and I found many of the scenic driving shots to be lulls that impeded the story (as opposed to additions that helped it along). Also, the editing in the early going is rather jumpy, and the director pulls one of my least favourite tricks: starting a conversation, for instance, in a restaurant, then picking that conversation up where it left off in the car, already on the highway, as though the ten to fifteen minutes that have clearly passed have not. What, were the characters pondering it the whole time? The ensemble cast does good work in some challeneging scenarios, particularly Huffman and Zegers, but the script and the direction cause the film to come up short. It didn't quite get where it was going... the second third of the film is a real powerhouse, but it doesn't save the stuttering first act or the suddenly-over finale. I'm worried that I'm being unnecessarily hard on this movie, but overall it just wasn't as hard-hitting (emotionally or "social-commentarily") as I expected it would be.