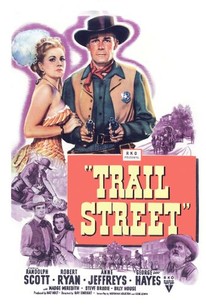 Legendary lawman Bat Masterson is called to rural Kansas to defend farmers from ruthless cattlemen. Joining Masterson in his efforts to clean up a lawless town are a couple of locals: Masterson's old chum Billy Burn and landowner Allen Harper. But ranch owner Logan Maury proves to be a more than formidable opponent. He'll stop at nothing, including murder, to turn the farmers' fields into grazing grounds for his cattle.

Glen McCarthy
as Henchman
View All

It does the Western genre proud.

There are no featured reviews for Trail Street at this time.