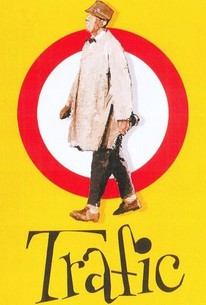 This comedy is one of the few films by French comedian/filmmaker Jacques Tati (1908-82), born Jacques Tatischeff. His small output is attributed to his perfectionism. Tati wrote, directed, and acted in the films he made. Among his notable films are Jour de Fete, and Mon Oncle. Although his nearly silent films were made long after Buster Keaton's hallmark silent films, his work is often compared to Keaton's. The story concerns Tati's efforts to deliver a gadget-filled prototype car to an auto show in Amsterdam. Along the way, he and his compatriots run into every type of traffic obstacle imaginable. One highlight is a segment comparing cars' windshield wipers with their owners, to devastating effect. This film was released again in 1972 in the American market with 11 minutes cut from it.

New on DVD & Blu-Ray: Deliver Us from Evil, Begin Again, and More

Tati is that rare film-maker who remains triumphantly himself, unimpressed by current trends and moods.

...in the breezy vapor that amounts to the movie's plot, it's not the destination that counts, but the leisurely, amiably aimless travel you take getting there.

A masterpiece in its own right -- not only for the sharp picture of the frenetic and gimmick-crazy civilization that worships cars, but also for many remarkable formal qualities.

Like Godard, Tati is also remarkably appreciative of the odd beauty that can be revealed in the shapes, patterns and colors created by the technology of planned obsolescence.

Everyone is incapable of dealing with the modern world, but Mr. Hulot is even worse off than the rest of us.

It is a time for one of thee best relaxations in life, helpless laughter.

While defending the consistency of Tati's vision as a humorist, it has to be admitted that Traffic is a fitful and disappointing successor to Playtime.

The more modest 1971 comedy Trafic and the 1974 made-for-Swedish-TV movie Parade are both sweet and entertaining, with moments of pure Tati magic.

In this charming comedy, Tati reinstates his protagonist and alter-ego, rediscovering the bucolic joys of country life.

Trafic is a relative trifle but nevertheless delightful.

The unique style of Jacques Tati's humor requires some adjustment. His jokes are almost all sight gags, and they often occur in corners of the screen where they're easily missed. Not only do his movies welcome repeat viewings, but they practically demand them. Tati has better films, but "Trafic" is certainly worthwhile. The story is more linear than his usual plotless, environment-based comedy -- his alter ego Mr. Hulot, a glamorous publicist (Maria Kimberly), her shaggy lapdog and another colleague or two are caravanning from Paris to Amsterdam for a car show. A truck carries their precious cargo: a small camper rigged with all sorts of delightful hidden conveniences (shower, barbecue, picnic table, bed, etc.) But multiple comic mishaps occur on the road and threaten to prevent the group from arriving in time. The first half-hour is a bit dull, but the action eventually picks up. The scene where the car's gadgets are revealed is the highlight, but other notable bits include a recurring joke about giveaway plaster busts, a prank to convince the publicist her dog is dead (it's funnier than it sounds) and a clever illusion where a baby's naked bottom is mistaken for a woman's cleavage.

Seriously what's so great about this movie?