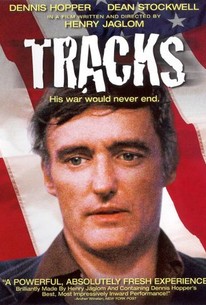 Henry Jaglom directed this moody meditation on the Vietnam War and one of its disturbed veterans. Dennis Hopper stars a sergeant who travels across the United States with the body of a fallen comrade, on a train to his friend's final burial place. As the train wends its way across the United States, the sergeant becomes more and more paranoid that the passengers on the train are out to get him. Finally, an energetic young woman named Stephanie (Taryn Power) befriends him, briefly giving him the courage to deal with the terrors of the war.

Alfred Ryder
as Man
View All

The movie has the stoned, improvised look of an artifact out of the 1960's, having less to do with considered opposition to the war than with a vague sort of dissatisfaction with everything, and no idea what to do about it.

The deeper it delves into symbolism, the more incoherent and hallucinatory it becomes.

An incisive, revelatory film about a returning war veteran from Vietnam transporting the body of a friend across the US for burial.

Dennis Hopper (brilliant throughout)... [struggles] to assert his bitterness and anger over an overwhelming impulse manifested by his hand to come up in an obedient military salute.

Jaglom seems unable to decide whether he wants it to be a character mosaic or a psychological nightmare ...

The rough, improvised structure suits the inarticulacy which the movie seeks to examine.

Stark reality mingled with paranoid fantasies in this film about a Vietnam veteran accompanying a fallen friend's body across the US for a proper burial give it an uneasy feeling.

...becomes increasingly aimless and flat-out weird as it progresses...

There are no featured reviews for Tracks at this time.