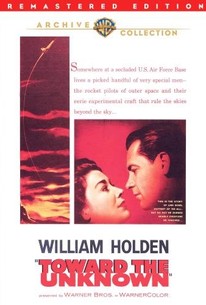 This high-flying thriller utilizes exciting footage of the USAF Thunderbirds in action--an interesting and authentic look into the world of Air Force test pilots. Set at Edwards Air Force base in California, the story centers on a dishonored pilot who is no longer allowed to fly. It seems that as a Korean POW he was brutally tortured and brainwashed until he could bear no more and he eventually cracked. Though it has been many years, he wants to clear his name and fly again. Unfortunately a general fears the pilot could again lose it during the testing of a highly experimental plan. Fortunately, the general's secretary is the former girl friend of the pilot and she convinces the general that he is rock solid. The pilot then sets out to prove it for himself. James Garner made his big screen debut in this film. ~ Sandra Brennan, Rovi

John Day
as Stranger
View All

Critic Reviews for Toward the Unknown

There are no critic reviews yet for Toward the Unknown. Keep checking Rotten Tomatoes for updates!

There are no featured reviews for Toward the Unknown at this time.

Toward the Unknown Quotes