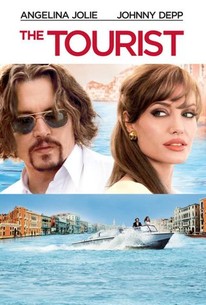 Critics Consensus: The scenery and the stars are undeniably beautiful, but they can't make up for The Tourist's slow, muddled plot, or the lack of chemistry between Johnny Depp and Angelina Jolie.

Critics Consensus: The scenery and the stars are undeniably beautiful, but they can't make up for The Tourist's slow, muddled plot, or the lack of chemistry between Johnny Depp and Angelina Jolie.

Critic Consensus: The scenery and the stars are undeniably beautiful, but they can't make up for The Tourist's slow, muddled plot, or the lack of chemistry between Johnny Depp and Angelina Jolie.

American tourist Frank (Johnny Depp) meets a mysterious beauty who drags him into a dangerous world of intrigue and espionage while traveling through Europe in director Florian Henckel von Donnersmarck's paranoid thriller. When Frank met Elise (Angelina Jolie) on the train, he thought it was a chance encounter. Little did Frank realize it was all part of a much bigger plan, one that would soon find him dodging bullets through both the historic streets of Paris and the winding canals of Venice. Now, the faster Frank and Elise run, the more intense their romance grows. ~ Jason Buchanan, Rovi

Rufus Sewell
as The Englishman

Renato Scarpa
as Arturo the Tailor

News & Interviews for The Tourist

View All The Tourist News

Critic Reviews for The Tourist

This should be a potent combination, but it turns out to be a fizzer.

The tone is lightly comic, the dialogue flirty and amusing but the performances are unengaged. There's no floor of reality, as there always was in a Hitchcock film, even his light confections.

"Sure, the plot is preposterous, but the two stars look great, the scenery is spectacular and the supporting cast is a hoot."

What's not to enjoy?

In a year of craptaculars, The Tourist deserves burial at the bottom of the 2010 dung heap.

Despite the star power, the film lacks fireworks. It proves to be a case of big star power with low wattage.

The dreadful dialogues and plot-holes do not help.

A creaking "star vehicle" for two stars who should have known better, and maybe had a little chemistry.

[The Tourist] is very entertaining and thoroughly enjoyable from the very start and doesn't let up until the screen goes black, which is something that very few films are able to pull off nowadays.

Overall an interesting and at times very gripping film, but one that perhaps could have done with taking a few more risks

Audience Reviews for The Tourist

To say the plot is preposterous is to say the least, and this piece of garbage unbelievably conceived by three Oscar-winning screenwriters is an insult to anyone's intelligence, with a ridiculous, deceitful ending that turns everything that happened before into sheer nonsense.

Angie Jolie and Johnny Depp in sort of a homage to the adventure/intrigue film jaunts of the late 60s. Venice is the postcard backdrop, along with snazzy hotels and parties and glitterati dressed to the nines. A couple of Bond actors show up to solidify the connection, should one have missed it. The whole shebang's only missing one thing: a leading male. Depp seems to be playing an entirely different movie than everyone else onscreen. Did the director assign this role, or did Depp choose it? Whatever is going on, its as if he could care less what is going on about him, and soon you agree with him.

"The Tourist" is a very poor movie. Of course, it represents Hollywood at it's worst. The movie was never intended to have any value. It's sole purpose was to cash in on the star power of Johnny Depp and Angelina Jolie. There is no way that this script would have been brought to life without those names attached. "The Tourist" is as lazy as film-making gets. It's slow, uninspired, predictable, and downright annoying. Speaking of the attached star power, this is just a phoned in performance by Depp and Jolie. They play the same roles that they always do. Brace yourself for this one, Angelina Jolie is engaging in espionage! But isn't Jolie a spy in every one of her movies? Strangely enough, with as much practice as she gets in these roles, she never turns in a believable performance. When Johnny Depp isn't trying, he normally portrays a quirky character that ends up in-over-his-head, and that's exactly what you get here. It's astonishing that nobody figured out that thrusting Depp and Jolie into their comfort zones would result in zero chemistry. Then again, you have to remind yourself that nobody making the movie cared if it was entertaining. Then it all makes sense. "The Tourist" is generic garbage, that I strongly urge you to avoid. If you're a die-hard fan of Johnny Depp or Angelina Jolie, you have to start watching better movies.

Critics have nothing on The Tourist because it seemed to fly right by their heads that at it's core, The Tourist is a fluff of ROMEDY and should be judged as such. The espionage premise plays a huge backseat role in what is one of the most well acted/scripted romantic comedies I've seen in awhile. The chemistry between Depp's initial awkward persona and Jolie's astute super-spy makes for a really charming watch and simply resonates as they stumble into the oddity that is love. I mean, let's look at other recent films that tackled this particular genre. There's Cruise's glossy, over-the-top cliche-filled "Knight & Day" and Kutcher's "Killers" which was literally the same product but with even worse execution. If you can honestly make that comparison and say The Tourist wasn't better then you either have an amateur sense of humor or an unhealthy obsession with explosions/action. It's cute, romantic, charming and at the same time somewhat elegant in that it plays with very classical spy-themes and archetypes.