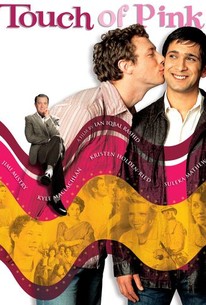 Canadian writer/director Ian Iqbal Rashid makes his feature film debut with the romantic comedy Touch of Pink. Jimi Mistry plays Alim, an young gay Ismali-Canadian living in a fashionable section of London. He has an active fantasy life involving Kyle MacLachlan, who appears as the charming ghost of Cary Grant. Alim also has an active social life in the real world with his actual boyfriend Giles (Kristen Holden-Ried). His life of leisure is interrupted when his mother Nuru (Suleka Mathew) arrives in town unexpectedly from Toronto. She also has a secret plan to take him back with her to Canada so he can settle down and find a nice Muslim girl to marry. Touch of Pink premiered at the Sundance Film Festival in 2004.

Liisa Repo-Martell
as Delia
View All

Critic Reviews for Touch of Pink

There are two crucial bits of miscasting, one bad, one good, both distracting.

Its plot is hackneyed and banal.

An uncomfortable jumble of Harvey, Bend It Like Beckham and The Birdcage.

Much of the problem with Touch of Pink rests with Mistry, whose nice guy appeal registers even less than it did in his previous starring vehicles, The Guru and The Mystic Masseur.

MacLachlan's strong jaw line and his valiant attempt to act so very Cary aren't enough to save this film.

As much as it aspires to mimic the charm of old Cary Grant pictures, Touch of Pink is hardly worthy of comparison to even the least of Grant's films.

A mildly amusing gay comedy, with the only novel point of Cary Grant serving as a spiritual mentor; the rest is formula.

...more self-congratulatory than genuinely edgy, and the best reason to see it is MacLachlan's tidy impersonation.

[It's] a blend of trite plot points and obnoxious characters, held together by the notion that you should be watching something else instead.

Rashid struggles with tone and pacing ... but his characters are so vivid and the romance so sweet that we forgive him.

A cute, ineffectual film that breaks absolutely no new ground but enjoys itself as it skips down the familiar paths.

Kyle MacLachlan's robust impersonation of Cary Grant is good for a laugh, but its overuse is just one of the crimes against this joyless cross-cultural gay romance.

Audience Reviews for Touch of Pink

A BEAUTIFUL MOVIE!!! My sister was watching this, and I stopped and sat down to watch. LOVED IT!!

What do you get when you're gay AND you come from a culture that ABSOLUTELY DOES NOT ALLOW IT?!?!? You create an imaginary friend who's a lot like a classic movie star from Hollywood's golden age so that he may give you advice as to what to do. This movie is soooo cute. It's basically the same storyline as Bend It Like Beckham, except there's no soccer and the main character in this movie is a gay man who likes playing with a different sort of balls. Alim must hide the fact that he's gay to his mother, a stereotypically conservative Indian woman who is coming to visit him. The comedy that ensues is somewhat predictable but also very funny and endearing. Kyle MacLachlan is superb as the Spirit of Cary Grant and is probably one of his better performances in recent memory! Except for his role in Showgirls, of course! Kidding. Watch this movie. It'll make you laugh-- or at least chuckle and relax.