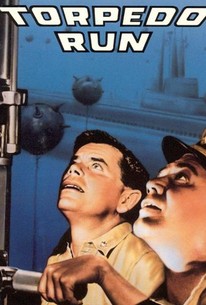 In the psychological WW2 drama Torpedo Run, Glenn Ford plays submarine commander Barney Doyle, who is obsessed with sinking a particular Japanese aircraft carrier. Several months earlier, the carrier had escaped destruction by shielding itself with a POW transport ship, which was sunk by Doyle's torpedoes. The sunken transport had been carrying Doyle's wife and daughter, captured in the Philippines. This tragically unavoidable incident has transformed Doyle into a modern Ahab, mercilessly driving the men under him towards the single goal of blowing the hated enemy aircraft carrier out of the seas.

A well-crafted submarine psychological thriller, from a novel by Richard Sale.

There are no featured audience reviews yet. Click the link below to see what others say about Torpedo Run!