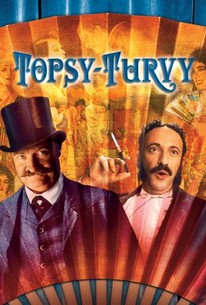 William Schwenck Gilbert is the librettist, writing the words. Arthur Sullivan is the composer, writing the music. Gilbert is the very model of a 19th-century British gentleman, an overly proper married man certain that he knows best. For nearly a decade, Gilbert and Sullivan's collaborations have delighted the English people. Their popular comic operas have recouped handsomely for the successful Savoy Theatre... But, in 1884, as a London heat wave cuts into the theater trade, their latest work, "Princess Ida," receives lukewarm press. Sullivan rejects Gilbert's next idea as "topsy-turvy" and unbelievable, and although Gilbert tries to accommodate him, they cannot agree. Mired at a creative impasse, Gilbert and Sullivan can barely converse. Then, Gilbert's wife, Lucy "Kitty" Gilbert, drags him along to a Japanese exhibition--exposure to the very different culture begins inspiration to embark on the production of "The Mikado."

Gary Yershon
as Pianist in Brothel

The notion of art as an organically evolving process is crucial to Leigh. Almost alone among directors, he creates his scripts in the rehearsal period through improvisations.

[A] beautifully crafted and lively romp around the 1880s stage world.

Leigh's cast are beyond compare, and the whole bighearted, splendidly droll celebration of the entertainer's lot surely stands among British cinema's one-of-a-kind treasures.

If you are a Gilbert and Sullivan buff, you will be in heaven. If you are not, the first thing you will need to know is that the film is nearly three hours long.

The film is a delight and a surprise, all the more so since Leigh is associated with gritty working-class stories.

Not your normal period piece, to be sure.

The film runs out of momentum about two-thirds of the way through, but by then its exquisitely wrought human and historical detail- and its lavish servings of fine singing- have cast a lingering spell.

Leigh's strict attention to detail and his uncommon method of involving his actors in the creative process of forming the script infuses life into material that could have easily become another stiff, British period production

The sense of a work of art coming to life has rarely been more beautifully or excitingly portrayed. This is a film not to be missed.

A great study on the struggle to create live theater, containing beautiful musical sequences and fantastic portrayals of the musical's creators.

There is not an unrealized or extraneous character in the film, and I can't remember a movie that so completely studies the intricacies of bringing a production to the stage.

The real magic of this film is in the way most of the characters skillfully navigate their way around each other's sizable but fragile egos.

Mike Leigh would not be the first name that springs to mind when presented with a biopic of Gilbert and Sullivan. Possibly Anthony Minghella, or maybe Ang Lee, but never a director only known for gritty, unremittingly depressing working-class drama. However, in 'Topsy-Turvy', Leigh has not only directed, but written, a fine piece of period comedy-drama. Leigh, it transpires, has always loved Gilbert and Sullivan and the love shows in his highly polished script. It not only exploits the music and words of the great nineteenth-century operettists but retains a feeling for the wit of their work throughout. W.S. Gilbert (Jim Broadbent) is more than annoyed at suggestions that he is becoming unoriginal and Arthur Sullivan (Allan Corduner) rather tired with working with him. He wants to produce great music and is uninspired by Gilbert's latest libretto. A chance visit to an exhibition of Japanese customs and produce stimulates Gilbert to write 'The Mikado', one of his most witty works (and, it seems, Leigh's favourite). After a lengthy vacation, Sullivan is willing to write the accompanying music and rehearsals begin. This is where Leigh's brilliance as both writer and director shines through, creating enormously entertaining and dramatic scenes while underlining the partners' unceasing perfectionism. A cast full of Leigh regulars, headed by the dreaming Corduner and wonderfully cantankerous Broadbent, are marvellous, with Timothy Spall and Kevin McKidd stealing the show as a pair of complete 'luvvy' actors. It is Shirley Henderson (also excellent in Michael Winterbottom's 'Wonderland') who gives the film a real emotional centre, however, as a widowed actress slowly turning to drink. Leigh's past, it seems, has not entirely been left behind.

the marvelous backstage story of the creation of gilbert and sullivan's mikado. i'm not a fan of operetta, and it's certainly not for everyone, but i enjoyed the hell out of it. jim broadbent is a constant delight. if u like musicals or british costume drama check it out

[font=Arial][color=darkred]Mike Leigh's latest might prove to be the old Brit's most daring and ambitious spectacle of memory. It's the tale of English muscial maestros Gilbert and Sullivan chronicalling their rocky yet firm relationship and the bustle of theater life. The period is set down exquisitely with massive amounts of elegant costumes and set designs, all of whom do well to distract you from the plot. Oh I forgot, there isn't one. The drawback to Leigh's 'Topsy-Turvy' is that it is less a movie and more of a recreation of Gilbert and Sullivan musical numbers. Each musical piece lasts in its enduring entirety unyielding to be edited in the least. Thus in between each interlude of song is a snippet of theater life and the insainty displayed much more fluently by last year's 'Shakespeare in Love'. 'Topsy-Turvy' degenerates into a 'Fantasia' style movie -- a musical number here, a snippet in between, then another musical number, and repeat for two hours and fourty minutes. To theater lovers, and especially Gilbert and Sullivan enthusiasts, Mike Leigh's celluloid account should prove a triumpth and brilliant in its startling recreation of 1880s English life. But to any other audience members out there, boredom will set in quickly enough and you'll be asking yourself when you leave if you bought a movie ticket or a theater ticket.[/color][/font] [font=Arial][color=darkred]Nate's Grade: C [/color][/font]