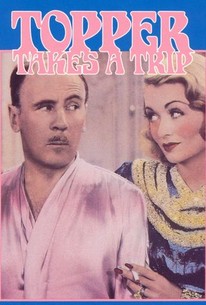 Except for a few clips from 1937's Topper, Cary Grant is absent from the proceedings of the 1939 sequel Topper Takes a Trip, though his Topper co-stars Constance Bennett, Roland Young, Billie Burke and Alan Mobray are back in harness and in fine fettle. Picking up where the first film left off, we find mild-mannered banker Cosmo Topper (Young) being sued for divorce by his wife Clara (Burke). It's all because of Topper's questionable behavior while at the mercy of mischievous ghosts George and Marion Kerby (Grant and Bennett). All the ghosts had wanted to do was "liberate" Topper from his stuffy existence, thereby performing a good deed that would allow them entree into Heaven. George Kirby was permitted to ascend to the Choir Invisible, but for obscure reasons the spirit of Marion was left behind. She decides that the only way she'll be allowed past the Pearly Gates is to reunite Mr. and Mrs. Topper, and to that end follows Clara to Paris and Monte Carlo. This time, Marion is joined in her mission by Skippy, a ghostly pooch who, like his mistress, can appear and disappear at will. As in the earlier Topper film, Roy Seawright's special effects vie for top comedy honors with the superb performance by Roland Young as the ever-flustered Cosmo Topper. Equally amusing are supporting players Veree Teasdale, Franklin Pangborn and Alex D'Arcy. The second of producer Hal Roach's Topper films (based on the novels by Thorne Smith), Topper Takes a Trip would be followed in 1941 by Topper Returns...and, of course, by the eternally-rerun TV series of the 1950s.

Cary Grant is very much missed from this mildly amusing sequel to the 1937 comedy, which was nominated for the Special Effects Oscar.