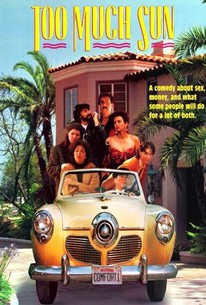 In this riotous British satire, a conniving Catholic priest convinces a dying tycoon into writing the church into his will by having him add the following proviso: the tycoon's children will only inherit the fortune if one of them can produce an heir within one year after his death. If they fail, all the money will go to the Church. The priest is well aware that the magnate's son is gay and that his daughter is a lesbian. After the ailing fellow signs the will, the priest allows him to die. The two siblings soon find themselves pursued by two aspiring real estate agents who want some of that money for themselves and agree to let the middle-aged siblings adopt them. A voluptuous seductress also has her eye on the family fortune and she tries to sway the brother into giving her a go.

Critic Reviews for Too Much Sun

Mr. Downey is a funny man.

Downey has become what every true satirist fears most: outdated.

While Too Much Sun is hardly offensive enough to merit a community outcry, it's certainly worth a collective cold shoulder.

Although kicking off with a wickedly zany spoof of the spoiled rich, in which precious poodles are whisked off to a canine Club Med, the film's inventiveness quickly spirals downward.

There are no featured reviews for Too Much Sun at this time.

Too Much Sun Quotes