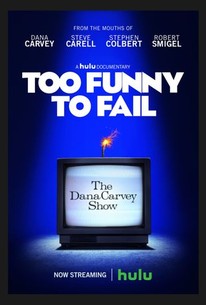 Too Funny To Fail Videos

Too Funny To Fail Photos

It had all the makings of a huge television success: a white-hot comic at the helm, a coveted primetime slot, and a pantheon of future comedy legends in the cast and crew, but "The Dana Carvey Show" still managed to fail. This documentary tells the true story of a crew of genius misfits who set out to make comedy history... and succeeded in a way they never intended.

Critic Reviews for Too Funny To Fail

Too Funny to Fail, which is now streaming on Hulu, is a sprightly and hilarious look at what a title card calls "arguably one of the most spectacular failures in television history."

The documentary revels in the details of how the show confounded the network and infuriated many viewers during its seven-episode run.

For a movie about a cancelled TV show, Too Funny to Fail is surprisingly cheerful, in large part owing to the fact that so many of the performers and writers on the show went on to such great comedy heights.

This isn't so much a rise-and-fall story as just a story about a very rapid fall, and even the documentary's participants have trouble taking the subject seriously. But that just makes the stories they tell even funnier.

Too Funny to Fail is a fascinating story of just how much risk Hollywood was willing to accept back then.

Even if this isn't an entirely inventive approach to an oral history of a failed experiment, Too Funny to Fail touches on a profound idea that runs through popular mainstream artistic pursuits.

As a film, Too Funny to Fail is workman-like. It does the job it needs to do, gives the performers room, and assembles the pieces of the story in a clear and coherent fashion.

With some of the funniest people on Earth enthusiastically discussing their greatest failure, it's the interviews that really sell this insanely entertaining film.

... Too Funny To Fail is one of the most entertaining comedy documentaries in recent history.

The sketch comedy series was truly ahead of its time.

Too Funny to Fail continues a streak of outstanding niche original documentaries from Hulu this year.

Too Funny To Fail amusingly looks at how a series with so much talent crashed and burned almost immediately - even with a lead-in of one of the top-rated Home Improvement.

Audience Reviews for Too Funny To Fail

There are no featured audience reviews yet. Click the link below to see what others say about Too Funny To Fail!

Too Funny To Fail Quotes