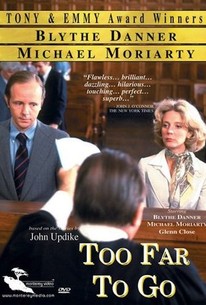 A series of 17 short stories by American writer John Updike form the basis for this examination of the rocky marriage of a New England couple. The movie was made for television in 1979 and directed by Fielder Cook. Updike's stories focus on the issues of fidelity and responsibility hiding beneath the calm veneer of American suburban affluence. Michael Moriarty plays Richard Maple, a non-conformist middle-class man married to Joan Barlow Maple (Blythe Danner). Glenn Close plays the home-wrecker Rebecca. The couple's problems are both traced to childhood incidents in which their propensity for taking the easy way out is established.

Critic Reviews for Too Far to Go

There are no critic reviews yet for Too Far to Go. Keep checking Rotten Tomatoes for updates!

There are no featured reviews for Too Far to Go at this time.

Too Far to Go Quotes