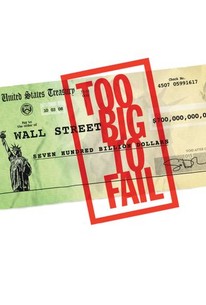 Critics Consensus: Too Big to Fail has too sharp a script and superlative a cast to ever feel disposable, even when it teeters toward being an efficient explainer of recent history instead of a fully-realized drama.

Critics Consensus: Too Big to Fail has too sharp a script and superlative a cast to ever feel disposable, even when it teeters toward being an efficient explainer of recent history instead of a fully-realized drama.

Critic Consensus: Too Big to Fail has too sharp a script and superlative a cast to ever feel disposable, even when it teeters toward being an efficient explainer of recent history instead of a fully-realized drama.

Too Big to Fail Photos

Oscar-winning director Curtis Hanson (8 Mile, L.A. Confidential) adapts author Andrew Ross Sorkin's penetrating expose of the 2008 Wall Street financial crisis in this made-for-HBO docudrama featuring an all-star cast. As the U.S. economy hits the skids, Treasury Secretary Henry Paulson (William Hurt) finds himself caught up in a critical battle of wills between the key players on Wall Street, and the powers that be in Washington, D.C. With just weeks to go before the country plunges into the most devastating financial crash since the Great Depression, the powerbrokers on both sides scramble to pull the failing economy back from the brink of disaster. Ed Asner, Billy Crudup, Paul Giamatti, Cynthia Nixon, James Woods, Tony Shalhoub, and Topher Grace co-star. ~ Jason Buchanan, Rovi

Erin Burnett
as Herself

Maria Bartiromo
as Herself

David Faber
as Himself

Steve Liesman
as Himself

Joe Kernen
as Himself
View All

Critic Reviews for Too Big to Fail

Without taking an partisan position on what happened... Too Big To Fail simply and clearly explicates a chilling moment in recent history. And for that, it has value.

The movie... captures the frustration of government officials as each hole they patched was followed by an even bigger leak.

Just a dramatized synopsis in which some noble cynics guard our citadel. It is hardboiled-instead of admitting that the egg just exploded.

HBO's rendition of the Wall Street meltdown still manages to feel fresh, entertaining, and even educational. But does it get to the point?

Too Big to Fail is a chronicle of recent events... But it fails to transform those events into anything valuable or special, beyond docudramatic re-creation. Ultimately, it's scope is too big, and it fails.

The movie may do an adequate job of mining what's left of our collective outrage, but it comes up short as an artistic expression of post-recession catharsis.

You feel all the anguish, desperation, humor, and, yes, gallantry of the moment.

Although it's handsomely directed and competently acted, Too Big, even with its narrow focus on the events of fall 2008, tackles too much story with too little narrative drive.

Too Big to Fail ultimately comes off as a talky, surprisingly dull drama that all-too-often feels a reenactment on a financial news network.

What keeps Too Big To Fail from being a dry run through recent history is its lightning pace, in which the stakes of the nation remain keenly at the forefront.

Takes a topic that could have felt like homework and turns it into effective entertainment - even if that entertainment might teach you something along the way.

Audience Reviews for Too Big to Fail

It is 2008 and the stock price of Lehman Brothers is falling and CEO Richard Fuld(James Woods) is badly in need of cash and a sugar daddy. However, he rejects Warren Buffett's(Ed Asner) offer of $40 a share as an insult to his pride and his manhood. And then instantly regrets having done so because the stock price keeps falling, and a deal with a Korean consortium falls through. Just to add insult to bankruptcy, Treasury Secretary Henry Paulson(William Hurt) says there will be no government bailout this time, so Fuld had better work out something with all the other banks. "Too Big to Fail" is certainly a mixed bag. It gets off to a bad start, as it seems like we've walked into a movie that has already started.(Instead of the archival news footage during the credits, the movie should have instead gone with a Star Wars like scroll: "The empire's finances were beginning to crumble and Karl Marx was laughing in his grave.") And that's not to mention a pedestrian approach to the material and waiting until most of the way through before a discussion of the key issues. However, once it gets going, the movie takes on the form of a suspenseful political thriller at times. And it works having Paulson being the focal point of the movie as Hurt is very good in the role and it helps to have one center of attention with so many characters in play. On the other hand, Paulson, here does seem a little too good to be true, holding firm with sage advice from Ben Bernanke(Paul Giamatti, who almost steals the movie with only a bowl of oatmeal) and Timothy Geithner(Billy Crudup) and assistance from Paulson's Angels(Cynthia Nixon, Topher Grace, Ayad Akhtar & Joey Plotnick).

If someone wants to take a shortcut instead of reading the whole book, then this movie is a must watch.

Too Big to Fail is HBO's effort to dramatize the financial meltdown of 2008. It features an amazing cast, including James Woods, William Hurt, and Ed Asner. All bring a lot of presence to their scenes, even when the script doesn't fully let them shine. We get a lot of moments of tension and good dialogue exchanges, but we also get awkward moments that feel grossly manufactured so as to deliver exposition. In that sense, it's far from Margin Call, a film that brilliantly conveyed tension and steaks with similar themes. At the same time, it's not boring, executed with enough polish to keep it consistently engaging. The politics of the film and the editorializing are rather bland, however, with a far too forgiving portrayal of Henry Paulson and Ben Bernanke, when the true origins of the crisis and ongoing turmoil are far more sinister and planned than what the film showed. But HBO was trying to keep it mainstream, so judged on that standard, it was successful, though not "accurate" in the truest sense of the word. 3.5/5 Stars Note: An excellent breakdown of the crisis can be found in the award-winning documentary, Inside Job.

"You want "too big to fail" here it is! You got a better idea -the suggestion box is wide open!" Chronicles the financial meltdown of 2008 and centers on Treasury Secretary Henry Paulson.

REVIEW
"Too Big to Fail" addresses the subject of modern-day mega corporations whose failure, however deserving, might be of such catastrophic dimensions that it must be avoided, if at all possible, whatever the cost. The subject matter, the US financial crisis of 2008, is profound and enormous, in terms of its shock at the time and continuing consequences, to trivialize. The main characters - William Hurt, Paul Giamatti, for instance - become aware of the distinct possibility of spiraling into a 21st century version of The Great Depression. We are awestruck by such a possibility. The plot forces at work are both economic and political, both having profound influences. Politics? As usual, it is the Art of the Possible. Economics? A very difficult-to-comprehend arena, neither art nor science. The story leads us, step by step, as numerous characters play their role on this stage. The message: How could they have been so stupid? The filmmakers have hit the nail on the head.

Too Big to Fail Quotes