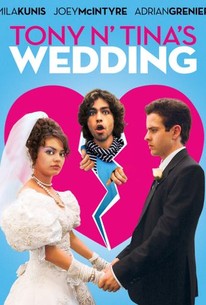 What if Romeo and Juliet's parents had tried to put aside their differences and allowed the kids to get married? The tale unfolds as comedy about two Italian families from different sides of the subway tracks. The Nunzio's, led by dominant patriarch Tony "Big T" Nunzio, are proud to be from Astoria, Queens where they operate a GoGo Bar. The Vitale's, led by strong matriarch Mrs. Josephina Vitale, have moved away from "trashy" Queens and now reside in the pleasant suburb of Massapequa, Long Island. Even though the parents disapprove of the marriage they realize the kids, Tony "Little T" Nunzio and Tina Vitale, are in love. So they agree to try to get along for their wedding day-- "for the kids." Unfortunately for everyone involved, it might have been better had the kids just eloped. What can go wrong, does go wrong, in this tale about an Italian-American wedding.

Tony Travis
as Zeppo the Bartender

Michael Straka
as Stickey
View All

Tony n' Tina's Wedding picks all the Queens-Long Island clichés, rolls them into a ball, and then throws what's probably more of a spare than a strike.

Plays out like a far too long (108 minutes) sketch featuring stereotypical characterizations and witless dialogue and situations.

The not-exactly-long-awaited movie version is here, trading in stereotypes just as ineptly as the original.

Paradiso mistakes noise for comedy and bossy attitudes for satire.

This is unforced, gradually unhinged, always-entertaining hilarity involving one of the most unconventional wedding receptions ever to be put on film.

Nothing more than a white minstrel show and one is forced to wonder why this particular community is not out protesting it in force.

It's all mean-spirited, foulmouthed sniping about oversexed tramps, philandering horndogs and Italians with big mouths and no taste.

Setting the action wishfully in the hilarious year of 1988 for hair and fashion points, writer-director Roger Paradiso throws a pall of desperation and contempt over his throng of caricatures before they even leave the church.

There are no featured audience reviews yet. Click the link below to see what others say about Tony 'n' Tina's Wedding!