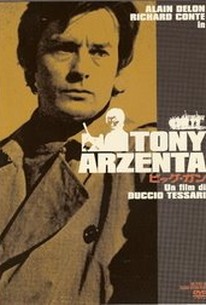 A Mafia hitman's decision to leave his profession results in bloodshed and tragedy. The violence begins when his bosses, to help him change his mind, have the assassin's wife and child brutally murdered, causing the hitman to launch a vendetta against his bosses. The film is also titled Big Guns. ~ Sandra Brennan, Rovi

Alain Delon
as Tony
View All

There are no critic reviews yet for Tony Arzenta. Keep checking Rotten Tomatoes for updates!

There are no featured audience reviews yet. Click the link below to see what others say about Tony Arzenta!