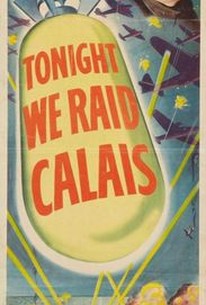 A timely film when first released in 1943, Tonight We Raid Calais survives as an entertaining adventure some fifty years later. John Sutton plays a British intelligence officer, sent into occupied France with a small unit to local a German munitions depot. While travelling under cover of darkness, Sutton confronts a French maiden (Annabella) who hates the British and the Germans with equal fervor. She eventually determines which side is the right side and allows Sutton to continue his mission. The officer is captured by the Nazis, but his comrades locate the munitions plant and notify the Allied bombers. The screenplay for Tonight We Raid Calais was written by future blacklistee Waldo Salt, whose liberal stance was politically correct during wartime but considered a "no no" once peace was declared.

George Lynn
as Lieutenant
View All

Brahm keeps it fast paced, but can't make it more than a wartime morale booster.

There are no featured reviews for Tonight We Raid Calais at this time.