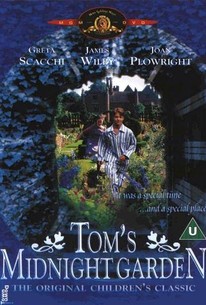 This fantasy for younger audiences concerns Tom (Anthony Way), a 14-year-old English boy who in the 1950s is sent to live with his Aunt Gwen (Greta Scacchi) and Uncle Alan (James Wilby) after one of his siblings becomes seriously ill. Late one night, Tom makes a remarkable discovery -- after midnight, Gwen and Alan's clock strikes thirteen, and the dingy alley behind their home becomes a scenic wonderland where he meets Hatty (Florence Hoath), a 12-year-old orphan girl who lived 70 years ago. Tom's Midnight Garden, which was adapted from the novel by Philippa Pearce, also features a supporting performance from Joan Plowright.

Rory Jennings
as James at 12

Noah Huntley
as James at 20

Stuart Piper
as Hubert
View All

If you were twelve in 1989, chances are you'll thrill to the nostalgia kick.

The story of a glum, monotone little boy who wanders around a stretch of grass and never looks happy.

There are no featured reviews for Tom's Midnight Garden at this time.