Tomorrow, When the War Began2012 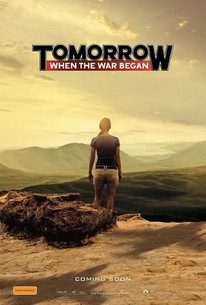 Critics Consensus: While the script isn't amazing and the story's race issues linger, this adaptation of John Marsden's book is an exciting, action-heavy adventure that should please fans of the series.

Critics Consensus: While the script isn't amazing and the story's race issues linger, this adaptation of John Marsden's book is an exciting, action-heavy adventure that should please fans of the series.

Critic Consensus: While the script isn't amazing and the story's race issues linger, this adaptation of John Marsden's book is an exciting, action-heavy adventure that should please fans of the series.

Tomorrow, When the War Began Photos

Tomorrow When the War Began is a pulse-pounding action thriller that follows the journey of eight high school friends in an Australian coastal town whose lives are suddenly and violently upended by an invasion that no one saw coming. Caitlin Stasey stars as 17 year old Ellie Linton, a precocious teen who leads her best friends including Corrie (Rachel Hurd-Wood) and Kevin (Lincoln Lewis) to an isolated, deep in the woods camp site named 'Hell.' Upon returning, they come to grips with the fact that their country has been overrun by a mysterious, invading army. When the hostile armed forces become alerted to the presence of the teenagers, Ellie and her friends, along with a new recruit (apathetic stoner Chris Lang, played by Andrew Ryan) - must band together to escape, outwit and strike back against the mysterious enemy that has seized control of the their town and imprisoned their friends and loved ones. -- (C) Freestyle

News & Interviews for Tomorrow, When the War Began

View All Tomorrow, When the War Began News

Critic Reviews for Tomorrow, When the War Began

You know the drill: A small group of unsuspecting adventurers wanders into danger, and not all of them will get out alive.

Just fast-moving fun, enough so to gloss over its shortcomings.

Despite some effective moments, the film doesn't begin to compare with Milius's highly sophisticated rightwing movie that gives the Soviet and Cuban invaders their due.

Despite some decent acting, the teenagers seem more cardboard than flesh and blood.

It passes the time innocuously enough, but the ingredients for global success are missing.

This has a stand-out, star-making performance from Neighbours' Caitlin Stasey - if only she didn't always emerge from battle looking as if she'd just stepped out of a L'Oréal advert.

As a film made for it's teenage fans, it mostly succeeds.

Suffers from some painfully slow pacing and clichéd writing.

...despite the R-rating, this isn't really a movie for grown-ups, Tomorrow When the War Began can't be completely dismissed as a teen movie either. It's a curious thing, with sleek, fluid action set pieces and moments that approach - then bungle - grace.

Suffers from some technical and acting issues, but the piece is so exciting and engaging overall you'll undoubtedly be hoping for a sequel when the credits roll.

"Tomorrow" is less realistic than "Red Dawn," if you can wrap your head around that without making it pop off.

a nice combination of high school angst and blockbuster action

Audience Reviews for Tomorrow, When the War Began

Last year, the remake of the action popcorn cult hit Red Dawn hit theatres, and was disappointing to say the least. The idea of a teen militia fighting an enemy is nothing new, but when it's done right, you can pull off a well crafted film with a cast that can actually act. Although the Red Dawn remake was disappointing, I found it to be a decent film with mindless entertainment value. However with that being said, it was a highly forgettable film. Tomorrow When the War Began on the other hand is a similar film, but it is a better executed movie that has a good cast and a better plot. The film is packed with action and drama and it is a standout film that is sure to please viewers that were let down by the Red Dawn remake. This film has a better cast and a much better script, which makes this a necessity to watch for viewers looking for the perfect entertainment. The film is not perfect, but for the most part, it more than delivers its fair share of thrills. Plus on the other hand, the film is well structured with good characters and a very good plot, better than the Red Dawn remake anyway. I really enjoyed the film, and thought it was a well crafted picture worth checking out. If you love these types of films, don't hesitate to seek this one out, you'll be glad you did. The film could have used a bit more polishing in some areas, but for the most part; it succeeds at being a good film that will highly entertain you from start to finish.

"With all the crap in my life happening right now, I just wanted a simple action flick to ease my mind and not make me think so much. This film succeeded that for me. It wasn't the best film I could have chosen, but it was listed closer to the top of my que on Netflix, so that is what was chosen. The acting is OK. Nothing to write the award shows about. The story wasn't too interesting either. But still it managed to entertain me with it having the essence of "Red Dawn". But not as good. I got into it and that's all that mattered. I needed to be brain dead for awhile and this film succeeded in making that happen. I think it's worth a look at. Plus I think I might have liked it bit more because of all these damn apocalyptic books I've been reading. Still, give it a go if you get a chance."

I love the concept and execution of the novel but there were times when I could tell this was created from a young adult series of books. While Red Dawn didn't hold back when it came to the reality of the risk the characters put themselves in this one seems to shy away from it. It's a great start to what could be a great series of films.

A film about teenagers at war. However, these aren't REAL teenagers in a REAL war. This is all fictional crap, leaving our protagonists as self-obsessed prats, that will chat about kissing boys when they are in the middle of blowing up a bridge. The film is just a teenagers fantasy. Dumb-ass teenagers will come out hoping a war will break out soon. They are able to take out highly trained soldiers, which have just seized a developed country. It doesn't make sense, and this lack of sense leads to huge shifts in tone which collide traumatically. There's some slapstick humor, quickly followed by insane rants about the nature of the soul and life. Even after just 45 minutes these rants come across as out of character. The tension is non-existent. In the right hands, a film like this could have had be biting my finger nails, instead I was clipping them due to boredom. The film also muddles its themes. Is it against war or not? Perhaps this is due to the characters having to muse on such complex questions, but then it all hangs on whether or not the dog will live. A short and subtle moment where Ellie sees a painting of Aborigines doesn't raise any interesting discussions. Instead, they find a bullet-proof rubbish truck and have a high speed chase. Like a child trying to get involved in a debate with an educated adult, this is interesting to watch at first, but ultimately embarrassing.

Tomorrow, When the War Began Quotes