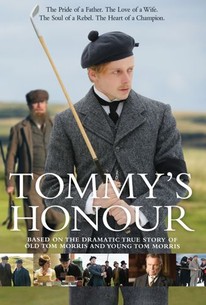 Set against the early days of the sport and stunning landscape of Scotland, TOMMY'S HONOUR is based on the intimate and powerfully moving true story of the challenging relationship between "Old" Tom Morris (BAFTA winner Peter Mullan) and "Young" Tommy Morris (Jack Lowden, DUNKIRK, '71, DENIAL), the dynamic father-son team who ushered in the modern game of golf. As their fame grew exponentially, Tom and Tommy, Scotland's Golf Royalty, were touched by drama and personal tragedy. At first matching his father's success, Tommy's talent and fame grew to outshine his father's accomplishments as founder of the Open Championship in 1860, his stellar playing record, and his reputation as the local caddie master, greenskeeper and club & ball maker. In contrast to his public persona, Tommy's inner turmoil ultimately led him to rebel against the aristocracy who gave him opportunity, led by The Royal and Ancient Golf Club of St. Andrews chief Alexander Boothby (Sam Neill, JURASSIC PARK, THE PIANO), and the parents who shunned his passionate relationship with his girlfriend-then-wife Meg Drinnen (Ophelia Lovibond, GUARDIANS OF THE GALAXY, MAN UP).

Golf buffs might appreciate its recreation of the sport in the late 19th century, but to love the film unreservedly, you'll need an appetite for the cinematic equivalent of treacle-topped porridge.

Mullan is never less than compelling, but the editing is abrupt, the story is formulaic and the sparky dialogue is submerged under a clubhouse of dour Scots clichés.

Endearing but too safe.

The film's no hole in one, but given the level of cringe that could have been possible, you'd have to chalk it up as a very dignified par.

Tommy's Honour is that rare sports film that fully captures the passion and emotional connection that some players have to their chosen pursuit.

With by-the-numbers plot and structure, Tommy's Honour is a nice and untaxing way to spend a lazy Sunday afternoon, but is unlikely to linger in the mind afterwards.

It's a glossy, well-acted film that is hopelessly dry in its portrayal of a sport in transition.

The script plays safe... but Mullan and Lowden supply a moving depth of emotion, while the rowdy nature of early golf matches and the bristling class conflict off the course both prove something of an eye-opener.

The story of Tom Morris and his eldest son is a handsome affair. But just as golf has been described as a good walk spoiled, so this could be regarded as a fair to middling movie held down staid subject matter. It is, alas, awfy dull in the golf parts.

There are no featured audience reviews yet. Click the link below to see what others say about Tommy's Honour!