To Love, Honor and Deceive1996 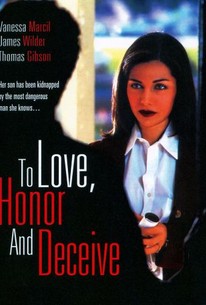 To Love, Honor and Deceive Photos

Sydney Carpenter (Vanessa Marcil) has just learned that her husband is a low-down crook. Not long afterward, both Sydney's husband and her son are lost at sea. Though she grieves for her son, there is clearly an air of relief about Sydney whenever she discusses her hubby. Even so, when evidence surfaces that the deaths have been faked and that at least one of the two "victims" may still be alive, Sydney engages the services of a police detective, Jim Sanders (James Wilder), to uncover the truth--this despite the fact that the FBI has ordered Sanders and his department to steer clear of the case. To Love, Honor and Deceive first aired December 15, 1996 on ABC.

Critic Reviews for To Love, Honor and Deceive

There are no critic reviews yet for To Love, Honor and Deceive. Keep checking Rotten Tomatoes for updates!

Audience Reviews for To Love, Honor and Deceive

Pretty weak. Only really watched it for Thomas Gibson, and he's barely in it as it happens. Story is about a woman (who looks perfect in every single scene, even when she's grief stricken) whose husband and son supposedly drown in a boating accident. Then it turns out actually the husband has lied about who he is and has actually run off and kidnapped his son and is trying to exhort money. It's quite silly and doesn't actually make sense if you think about it too hard. Which I couldn't be bothered doing. It's watchable in a TV movie can't-be-bothered-to-find-something-better type of way. But it's not even remotely convincing and Thomas is in it too briefly to save it.

To Love, Honor and Deceive Quotes