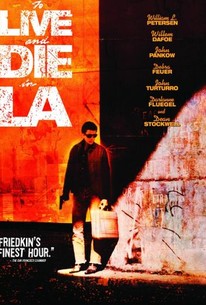 Critics Consensus: With coke fiends, car chases, and Wang Chung galore, To Live and Die in L.A. is perhaps the ultimate '80s action/thriller.

Critics Consensus: With coke fiends, car chases, and Wang Chung galore, To Live and Die in L.A. is perhaps the ultimate '80s action/thriller.

Critic Consensus: With coke fiends, car chases, and Wang Chung galore, To Live and Die in L.A. is perhaps the ultimate '80s action/thriller.

To Live and Die in L.A. Photos

William Friedkin's crime thriller, based on a book by U.S. Secret Service agent Gerald Petievich, concerns an arrogant Secret Service official who wants to get his man at any price. Willem Dafoe plays Eric Masters, an ultra-smooth counterfeiter who has managed to sidestep the police for years. He is so up-front about his dealings, in fact, that when some undercover agents try to make a deal with him at his health club, Eric tells them, "I've been coming to this gym three times a week for five years. I'm an easy guy to find. People know they can trust me." But when young and eager Secret Service agent Richard Chance (William L. Petersen) finds out that his partner has been cold-bloodedly murdered by Eric, he trains his relentlessness upon capturing Eric -- whether it means robbery, murder, or exploiting his friends and associates. As Chance erases the dividing line between good and evil, he drags his new partner John Vukovich (John Pankow) and Ruth Lanier (Darlanne Fluegel), an ex-con, down into the maelstrom with him.

Mark Gash
as Himself

Jane Leaves
as Serena
View All

Critic Reviews for To Live and Die in L.A.

"To Live and Die in L.A." will live briefly and die quickly in L.A., where God hath no wrath like a studio executive with bad grosses.

It feels like a transmission from a different planet.

Engrossing and diverting enough on a moment-to-moment basis but is overtooled.

Friedkin plays it as brutal and cynical as he ever did with The French Connection...

On its own terms, it's a considerable success, though it's a film that sacrifices everything in the interests of style.

The film isn't just about cops and robbers, but about two systems of doing business, and how one of the systems finds a way to change itself in order to defeat the other.

A cops and robbers tale of stirring complexity and sundrenched darkness.

Both excellent, A-list action film and deconstruction of the alpha male wild card cop cliche, Friedkin furiously displays his mastery of the form with this phenomenal 1980s thriller.

The film is cheesy as hell but it is a ton of fun for someone who remembered how this passed as uber-edgy back in the day.

The action thrives on overkill.

A profoundly ambivalent motion picture... completely upends every convention of its hidebound genre without even seeming to notice that it has done so.

[William] Friedkin creates a jittery atmosphere of adrenaline and corruption and danger...

Audience Reviews for To Live and Die in L.A.

An explosive thriller very well directed by William Friedkin, with great performances, many awesome action scenes - especially an exhilarating car chase - and a morally thought-provoking story that culminates in a fantastic, shocking ending.

'To Live and Die in L.A.' is ultimately something of a snorefest; watch this with even a grain of lethargy and you'll be lost. And that's a shame, because there is much artistic merit to be found in the film. The killer Wang Chung soundtrack compliments stylish sequences throughout, and is especially effective when capturing the Los Angeles landscape. The opening montage is very striking both visually and aurally; the sequence showing Master's counterfeiting procedure is also a pleasure to watch. Sadly though, the first twenty minutes and the closing credits of the film are the most interesting and engaging. Even its stylistic flair becomes tired, Wang Chung being overused and placed in sequences that just don't require it. To Live and Die in L.A. could've been far tauter; it rouses you from your catatonic state only a few times with its surprising gore and of course that famous lengthy car chase. The premise is simply Richard Chance's (William L. Peterson) relentless pursuit of a murderous counterfeiter named Eric Masters (Willem Dafoe) who has killed Chance's partner and 'best friend for seven years'. Chance, his safety hindered in the haze of his own hubris, is prepared to do whatever it takes to put an end to masters, even if it means breaking the law he enforces. Peterson's anti-hero isn't without his clichés: when presented with new partner John Vukovich (John Pankow), the film indulges in the common 'You know I work alone' cliché. In its entirety, To Live and Die in L.A. is a superficial, viewer-unfriendly production that just doesn't engage it's audience; the characters are flat and the plot is bloated and hard to follow. Its aesthetic redeeming features are seldom found over the course of 1hr 56 minutes, and even if there were more, it wouldn't save this film from its unsubstantiated characters and narrative.

I don't throw around the term neo-noir lightly, but this film has the body of your average 80's cop thriller, with the heart and soul of a noir. William Petersen is good here as the hard-boiled and morally ambivalent detective Chance. As for Friedkin, whether he wants to admit it or not, is not a God. But he does know how to craft a compelling film. Although this is not as captivating as the French Connection or the Exorcist, the action scenes are still very impressive and shot with vigor. He takes chances that really elevate the material in a lot of ways. The story is a bit messy and the film is steeped in the 80's aesthetic which unfortunately does not age well. However, it is much better than you would expect of your average thriller.

Some Minor Spoilers Here*********************************************************** There are three things going for this crime thriller: it's a great in the sense of being a believable and well-constructed story; for the time, it has ordinary and not top box-office stars, a cast that produce star quality performances; and, of course, it's directed by William Friedkin, a director well known for constructing cinema designed to shock. The narrative which I understand only barely resembles the story line of the novel is a piece of nasty work in the form of the moral ambiguity that constantly arises when 'good' guys exceed their authority to do whatever it takes to bag the 'bad' guys. Friedkin had already explored that in The French Connection (1971) but, at that time, he used a big star draw card with Gene Hackman, who, as Popeye Doyle, trod on a lot of toes and faces to do the job and still managed to garner sympathy from this viewer, and many others, despite his excesses. That is not the case for Richard Chance (William Petersen), the T-man who'll do anything to get Rick Masters (Willem Dafoe) for murdering another T-man, Jim Hart (Michael Greene), Chance's partner in crime, so to speak. You see (literally and visually) the trouble with Chance, is that he always wants to take a chance on bridging the gap between doing what's right and proper, and doing what he wants to get the job done; ethically, he's a true pragmatist totally vacuous when it comes to core principles. And that's in direct contrast to Rick Masters, who's loyal to all those around him, until they double-cross him; only then do those real 'bad' guys pay the price for their double trouble. From the narrative perspective, Chance and Masters are mirror images, of course, and each shares the same first name (although, for Masters, Rick is a nick-name), thus providing a duality of principle and purpose in the totally corrupt society as presented by Freidkin; and all of which is summed up with Bob Grimes' (an urbane and consummate Dean Stockwell) pithy rebuttal to Bianca (Debra Feuer) when she asked him why he was lawyer for Masters: "It's just business". Note the great grimy name for Stockwell's totally debased character... So, the great irony for this story is that Chance works within the law as a T-man, but operates as much as he can outside of it to further his personal interests; while Masters works outside of the law as an anti-T-man (he counterfeits money), while operating within it as much as he can using corrupt lawyers and the legal system to further his own interests. So, who is the real bad guy? Who deserves more sympathy from society? The ending is fitting, as it should be: out with the old, in with the new. Society continues to function, in all its grime and glory, such as it is; but it is also Friedkin's Disconnection on a grand scale for telling the truth about how it all works. Little wonder: most people can't handle the truth, as somebody said, because there's a little bit of Chance and Masters in all of us. And, we all know what happened to Friedkin's career as a director after this one was released. There are, however, few thrillers, in the last twenty-five years, better than this one for irony, suspense and action. Add to that the sexually pulsating sound track from Wang Chung and the on-site location shooting around Los Angeles and you have a very believable story in a city where angels always fear to tread. Is it just co-incidental that many of the actors went on to greater recognition. For William Petersen, this was his second movie; for Willem Dafoe, it was his sixth; for John Pankow, his third; Turturro, his fifth and so on. See it for sure, if you haven't already; see it again for what you missed first time around. Highly recommended

To Live and Die in L.A. Quotes