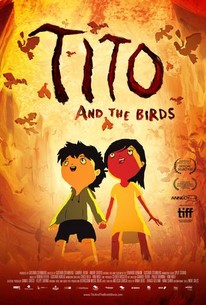 Tito and the Birds is a film about a little boy and his journey to save the world. Tito, a shy 10-year-old boy, lives in a world on the brink of pandemic. Fear is crippling people, making them sick and transforming them. Tito realizes, based on his father's past research, that there may be a way to utilize the local pigeon population and their songs to create a cure for the disease. His father was forced to leave when Tito was only six and the struggle to find a cure becomes linked with the search to find his father again, along with his own identity. Part action part drama, Tito's journey is at once an uplifting and insightful adventure about a boy fighting to find out what is right and to learn how to overcome his own fear.

There's a human quality to these visuals, which are pointedly not striving for perfection, but revel instead in supposed defects like smudges, jittery lines, color blotches and distorted proportions.

Makes good use of its combination of oil-paint backgrounds and precise-pencil characters but rather spectacularly fails to stick the landing.

"Tito" manages to make its ideas feel new just as the events of today's world make them feel increasingly relevant.

All elements of the film cohesively create a must-see film about overcoming fear for kids and adults.

Tito and the Birds combines different art styles in a way that demonstrates the radical possibilities of animated storytelling.

A shrewd response to bigotry, packaged as a spooky adventure achieved through the integration of artisanal and digital techniques.

A visually transformative film that will appeal to both young and old alike.

It felt incredibly alive... very tactile, and I loved the score.

It's impossible to dislike the message of this animated effort from Brazil even if it's easy to dislike the often ungainly and heavy-handed way in which it's imparted.

The animation style has an oil painting aesthetic that is unique and beautiful.

The uncommonly smart story on display -- one that viewers of all ages should have no problem grasping -- is equalled by the striking visual style that it employs throughout.

This Brazilian animated feature is an incredibly timely film.

There are no featured reviews for Tito and the Birds (Tito e os Pássaros) at this time.