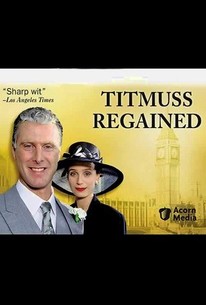 A sequel to John Mortimer's Paradise Postponed, the Thames Television miniseries Titmuss Regained detailed the further misadventures of bemused British bureaucrat Leslie Titmuss (here played by David Threlfall). As the new Conservative secretary of state for Housing, Ecology, and Planning, Titmuss tried to use his clout to scuttle a proposed property development near his own country estate. Against his better judgment -- not to mention his political convictions -- the Quixotic hero became emotionally involved in the situation, largely due to the presence of toothsome young Jenny Sidonia (Kristin Scott Thomas).

There are no critic reviews yet for Titmuss Regained. Keep checking Rotten Tomatoes for updates!

There are no featured reviews for Titmuss Regained at this time.