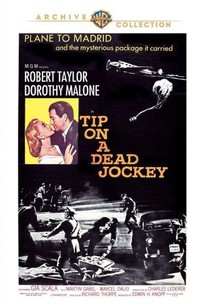 An expatriate American living in Madrid, former Air Force pilot Lloyd Tredman (Robert Taylor) is haunted by his memories of the Korean War and refuses to fly. So when he loses his last dollar on a horserace fixed by a smuggler, he forces himself to accept a $25,000 offer to transport a box of contraband currency from Egypt to Spain. But as Tredman makes the return flight home, he discovers his cargo also includes heroin as he races across the Mediterranean with Interpol hot on his trail. Costarring Academy Award winner* Dorothy Malone and Jack Lord (Hawaii Five-O), Tip on a Dead Jockey was adapted by Charles Lederer (Kiss of Death) from a short story by best-selling novelist Irwin Shaw (The Young Lions). Originally intended for Orson Welles, it was directed instead by Richard Thorpe, the sixth of eight films he would make with Robert Taylor, which include the swashbuckling classics Ivanhoe (1952) and Knights of the Round Table (1953).

Critic Reviews for Tip On A Dead Jockey

A good short story by Irwin Shaw has suffered in its translation to the screen.

There are no featured reviews for Tip On A Dead Jockey at this time.

Tip On A Dead Jockey Quotes