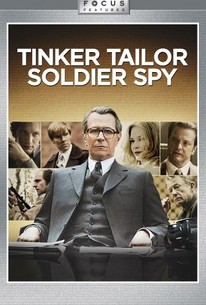 Based on the classic novel of the same name, the international thriller is set at the height of the Cold War years of the mid-20th Century. George Smiley (Gary Oldman), a disgraced British spy, is rehired in secret by his government - which fears that the British Secret Intelligence Service, a.k.a. MI-6, has been compromised by a double agent working for the Soviets. -- (C) Focus Features

Michael Sarne
as Voice of Karla

Ilona Kassai
as Woman in Window

The movie is riveting in the exact sense of the word: We feel nailed to the screen in the impossible task of working out what is going on-let alone why it matters.

A deliberate, cerebral, grim and utterly absorbing film that makes covert operations appear as unsexy as the Bourne films made them seem fast-paced and thrilling.

Ultimately, though, it is very much Oldman's film, thanks to a restrained tour de force performance. Smiley is weathered, worn and beaten down by life, but he's also a quiet, sure force of something that resembles good.

It's a well-crafted film that wears its old-fashionedness with pride.

"Tinker, Tailor, Soldier, Spy" has a murkiness to it that perfectly fits a spy film; you need to pay attention, or the story will slip away into the shadows.

Just watching Gary Oldman and his trenchcoated brethren march down the damp, ill-lit streets of Cold War London is enough to make you shiver.

A slow burn, fraught with intrigue, tension, and personal and professional betrayal.

Undeniably, given its narrative construction, it is an absorbing espionage thriller. [Full review in Spanish]

Tinker Tailor Soldier Spy tells a challenging tale. Emotionally distant, winding in on itself over and over again. I find it to be brilliant if cold.

Inherently a tale of intrigue, Alfredson may have created one of the most introverted spy thrillers ever filmed.

Those with a refined palate for challenging, intelligent and charismatic storytelling should unashamedly gorge themselves on the feast presented here.

A strikingly crafted homage to a bygone era of filmmaking that also feels thrillingly contemporary.

A complex espionage thriller that makes impeccable use of a careful pace to stretch the tension to its maximum and an appropriately dark cinematography to recreate the paranoia of the '70s and the Cold War maneuvers, while Gary Oldman underacts in a perfect performance.

Spy thriller that is a little too slow and uneventful for it's own good. Yes, sometimes there is a well paced shock, and overall the investigation is interesting enough. But there is no real twist to it and it all ends somewhat anticlimatic. The cast is outstanding as far as names go, but most of them remain somewhat underchallenged thanks to the (intentionally) bleak look and pace of the film.

It's slow, complex, stimulating and uncompromising; basically an average movie-goer's nightmare. I love that.

An ex spy for MI6 is called out of retirement to uncover a Russian double agent in the top echelons of their organisation. The one thing that can be said in favour of Tinker Tailor Soldier Spy is that it reeks of quality. The exceptional ensemble cast present what can only be described as an acting master class and the direction, photography and production design are all top notch. The problem with the film lies with its script, but that's not to say that it's badly written; quite the contrary in fact. The dialogue is smart, the themes sophisticated and characters well drawn. The trouble lies with the fact that this Cold War world of secrecy, back stabbing and betrayal seems so alien in the internet age that it's quite difficult to involve yourself in the dense, convoluted story. I couldn't connect emotionally with any of these cold-hearted and detached individuals and the fact of the matter was that I didn't really care who the mole was. Technically marvellous but those looking for a cinematic quick fix will find Tinker Tailor Soldier Spy too much like hard work.