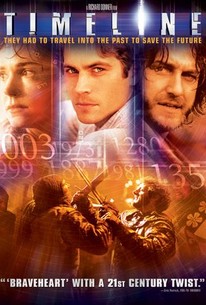 Directing his first film since 1998's Lethal Weapon 4, Richard Donner helmed this big-budget adaptation of Michael Crichton's novel of the same name. Featuring a script by first-time screenwriter George Nolfi, Timeline begins in France in the near future. A group of students from Yale are there studying a medieval site, when their professor, played by Billy Connolly, mysteriously goes missing. To make matters more enigmatic, the students are then taken back to the United States by a shadowy technology company called ITC, led by Robert Doniger (David Thewlis). The eccentric Doniger explains that because of a machine that his company built, their professor is trapped in 14th century France. In order to rescue him, two of the students, Chris Hughes (Paul Walker) and Kate Erickson (Frances O'Connor), along with Andre Marek (Gerard Butler), an archeological site manager, must travel to France, circa 1357, amid archaic war, deadly diseases, and other unexpected pitfalls. Meanwhile, David Stern (Ethan Embry), a third student, stays behind to keep an eye on the shady Doniger. ~ Matthew Tobey, Rovi

This big-budget adventure is based on a recent Michael Crichton thriller, though its premise is too stale to instill the sense of wonder critical to great sci-fi.

Yet another case of making time travel a messy ordeal rather than a load of fun, Timeline lacks the consistent tone, pace and point of view for either a science fiction thriller or medieval war adventure.

Walker is by far the movie's biggest liability, a walking vacuum in the time-space continuum with a terrifying ability to commit heinous crimes against cinema dialogue.

It's like Back to the Future without the laughs.

Time travels, but it sure doesn't fly by in this debacle.

Timeline is a dreadful movie. It's a hybrid of science fiction and medieval war film that was made for $80 million, but it looks cheap and it feels small.

a great example of a woulda-coulda-shoulda movie

A competent cast keeps this eccentric time travel movie (based on a Michael Crichton novel) amusing if far from successful.

Timeline takes the most ridiculous movie plot ever and multiplies it by ten.

In Michael Crichton's oeuvre, this is more The 13th Warrior than Westworld. Silly larks for young boys with liberal parents.

I like time travel movies, but this one leaves a bit to be desired. Usually when I watch a time travel movie, I imagine how cool it would be to be in their place - to find out some lost history or to be the wise character (with all your future knowledge), but it would not have been fun to live back in 1357.

Some archaeologists realise their dream and get to travel back in time, only things don't go as well as they'd've hoped. With a loud music score and lots of running and chasing going on I had the impression that Donner barely tries to hide that one is actually watching an old silent movie serial updated with modern gee whiz technology. Soooo dumb I was almost insulted.

When a group of archaeologists are sent back to the past to locate their missing mentor they are caught up in the seige of the castle they were excavating during the hundred years war. Timeline was on the receiving end of a critical savaging upon its release but I can't for the life of me see why. It's predictable, corny and the plot is about as plausible as Bill And Ted's Excellent Adventure, but it's a Hollywood family friendly adventure so of course it is. Richard Donner has proved time and again he is more than capable of producing entertaining, tongue in cheek light entertainment and Michael Crichton's story is just more of his usual brand of theme-park-meets-history that goes down so well the rest of the time. The set pieces are fun, the swashbuckling well executed and the characters are all perfectly likable (with the possible exception of the gratuitous yank sleepwalked by Paul Walker). A perfectly servicable if forgettable family adventure that's no worse than many others of its ilk; if you liked A Knight's Tale, you'll probably like this too.