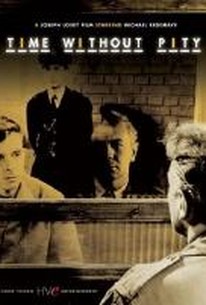 Time Without Pity carried the name "Joseph Losey" on the credits -- the first time in three years that the blacklisted director was permitted to use his own name on a film. This British-made suspense film was based on a play by Emlyn Williams. Michael Redgrave stars an anguished father whose son (Alec McCowan) is accused of murder. With time running out, Redgrave struggles to prove his son innocent of the charge. The paranoia prevalent in Time Without Pity can be attributed to Losey's own experience at the hands of the HUAC, though this element never gets out of artistic control.

Ernest Clark
as Under Secretary

Dickie Henderson Jr.
as The Comedian

David Heneker
as Pianist
View All

Critic Reviews for Time Without Pity

An hour and a half of absolute metaphysical raging

Its power is in the story's hard-edged structure.

Audience Reviews for Time Without Pity

Michael Redgrave (see Dead of Night) is convincing as a dysfunctional father struggling to save his wrongly convicted son from the hangman's noose. 11th hour dramatics and an overall sense of urgency give the film a pace that will challenge your endurance.

[font=Century Gothic][color=darkslategray]"Time without Pity" starts out with David Graham(Michael Redgrave) just getting out of a sanatorium for alcoholism. His son, Alec, is a convicted murderer who has twenty-four hours before he is hanged. Just to add fuel to the fire, the father and son have been estranged for a while...[/color][/font] [font=Century Gothic][color=#2f4f4f][/color][/font] [font=Century Gothic][color=#2f4f4f]"Time without Pity" is a very tense thriller that works very well on three different levels - David Graham racing against time to get his son a stay of execution; his continuing fight against alcoholism and avoiding taking a drink; and the uneasy relationship between father and son. The acting is top notch by Redgrave, Ann Todd, Leo McKern, Peter Cushing and a young Joan Plowright appearing in a couple of scenes. Plus, the ending is great.[/color][/font]