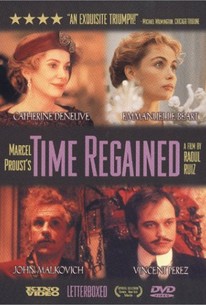 An ambitious project of Chile-born, Paris-based Raul Ruiz, this psychological drama brings to the screen the famous classic of Marcel Proust with fidelity to its interior monologues and streams of consciousness. Proust (Marcelo Mazzarella), on his deathbed in his small apartment on Rue Hamelin, is looking through old photos and remembering his life, as real characters intermingle with fictional ones from his novels. The period is 1914-18, when WWI is raging. Hidden in Paris, thanks to his asthma, Marcel Proust wanders into the night. He finds an aging courtesan in Café de la Paix, which is deserted by the curfew. Charlus, the seducer of young boys, is at the Palais des Felicites where he meets his lovers. Gilberte returns alone to Tansonville to evade the confiscation of her chateau by the Germans after the death of her husband at the front. Famous violinist Morel is hiding in a decrepit hotel. The demoralizing effects of war affect all the characters, hastening their decadence or transforming them into caricatures. In the whirlpool of the grotesque specter of war, Marcel finds refuge in his childhood memories to escape the atrocities around him. Death and decadence, the evanescence of human existence, and the relations between space and time are some of the main themes explored in this film, which reflects the works of Marcel Proust in every detail. Raul Ruiz has on his side a very good screenwriter, Gilles Taurand, and an impressive cast: Catherine Deneuve and John Malkovich, who have collaborated with Ruiz before, Emanuelle Béart, Vincent Pérez, Pascal Greggory, and the Italian man of theatre, Marcello Mazzarella. Shown in competition at the 1999 Cannes Film Festival.

Pierre Mignard
as Marcel as an Adolescent

Jean-Claude Jay
as Due de Guermantes

Camille Du Fresne
as Gilberte as a Child

Alain Guillo
as The Great Designer

Fabrice Cals
as Workman at Jupien

Jean-Pierre Allain
as Workman at Jupien

Andre Delmas
as Priest at Jupien

Bernard Barberet
as One Legged Man

Time Regained does not tell a story, and you will be disappointed if you go looking for one... It is not about memories but memory. Yours, mine, Proust's. Memory makes us human.

Even if it lacks the emotional power of Manuel, Time Regained is a lot closer to Ruiz's best work than it is to his worst.

All about remembering (cinema not least), this luxurious bath in the river of time is, to lift a phrase from Proust, consecrated to "the miracle of an analogy.

...he envisaged Proustian time not as a private sensation, but as a fully external, physical and objective "dimension"...This is what makes his Time Regained both hallucinatory and concrete, wayward and exact.

The stream-of-consciousness structure effectively captures a mind lost in thought; what it doesn't effectively create, however, is drama.

Moody, opulent, and just decadent enough, Ruiz's film is elegant all over and perverse around the edges, just as it should be.

A film that captures the richness of Proust's writing and the peculiarity of his sensibility through an array of unlikely imagery and staging techniques.

The best way to experience Time Regained is to let each vignette become an oar for rowing across the sea of Proust's memories.

I can't fault the acting. These folks were trying..but it was terribly boring.