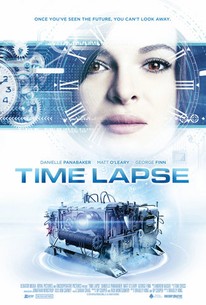 TIME LAPSE explores the possibilities of time travel through a machine that is capable of taking pictures 24 hours into the future. When three friends discover this mysterious machine in their neighbor's apartment, they encounter a number of pressing questions, not least of which is the whereabouts of their neighbor. Realizing the potential impact of the machine, Finn (Matt O'Leary), Jasper (George Finn), and Callie (Danielle Panabaker) attempt to cash in on their discovery. But, when a dangerous criminal learns their secret, the friends must set aside their differences and confront the paradox of a future that was once predetermined and entirely uncertain. Using an engaging blend of action, humor, and philosophy, TIME LAPSE is an original thriller that not only keeps the audience guessing, but also explores questions of pre-determination, free will and destiny.(C) Xlrator

The biggest surprise ... is how the story continues to unsettle after it ends.

The three central actors lack warmth or even basic rapport from the start, which makes it difficult to trust their fuzzy interpretation of the time-travel rules-or, for that matter, their tolerance for each other.

Bradley King's Time Lapse turns run-of-the-mill roommate friction into a heated mystery with the aid of a machine that takes snapshots of the near future.

a clever, low-budget genre flick with more ideas than money.

Even so, among the many inexpensive indies shot around Los Angeles, Time Lapse stands out. It makes the most of its assets and never appearing to need any more than it has to tell a reasonably engrossing tale of speculative film noir.

Competently acted and directed, Time Lapse isn't a cinematic revelation, but it does see the future-a sobering picture of the future of today's young people, flailing in a society that seems to give them limited options.

While ultimately a flawed film, Time Lapse does do what every memorable sci-fi brainteaser should: it makes you blind to the obvious.

It's ultimately difficult not to feel more than a little disappointed by Time Lapse's complete failure...

Its central gimmick runs out of steam pretty quickly, causing the story logic to crumble and the suspense to dwindle.

A great little sci-fi gem that plays with time paradoxes while adding elements of a self-contained paranoia thriller.

A relatively contained three-hander, the main leads all deliver strong performances that are engaging and add to the tension.

How well do you really know your neighbors? When Callie and Finn's elderly neighbor passes away, they are left to clean out his apartment and what they find is more than a little disturbing. Next to some strange device is a wall with thousands of pictures of them! At first they think the man was just a pervert, until the next day when they realize the machine is a camera that is taking a picture of their apartment, 24 hours into the future. With the help of their friend, Jasper, the couple decides to use the technology to get rich, but it doesn't take long for the local criminal element to realize what's going on, and try to take a piece of it. Most writer/directors don't hit a homerun their first time out, but in this case, with the help of a young up and coming cast, that's exactly what Bradley King did. This film is very engaging and has you on the edge of your seat, combined with an utterly shocking ending, this is the kind of film that you will still be thinking about days later. It's amazing to me that something of this quality was never released in theaters, but it is just as good, if not better than any thing you'll see on the big screen. The one drawback is that it does take a little while to get moving, hence the bad reviews from people who can't give a film more than twenty minutes, but once it gets started, Time Lapse quickly grabs hold and never lets go. It is refreshingly original and has a young cast that is every bit as intense as the film itself.

This is a pretty good movie that, honestly, in my opinion, doesn't take full advantage of its concept as possible. Or perhaps maybe it does and the only thing that's a problem is the fact that it pretty much plays out in exactly the same way you would expect. The only thing that really feels that's truly this film's, and not something borrowed, is the fact of why does the machine only take photos at nighttime when it, prior to these three finding it, took photos of both day and nighttime. Honestly, while the film does bring some interesting questions and themes, it's borrowed from other sources with the similar time travelling aspects. Not that this is a time travelling movie, but it does feature a machine that takes photos 24 hours into the future. But it's the same principles. What would you do with it? Would you use it for personal gain? Would you tell anybody? Would the machine change you? It's all been seen before and part of me thinks that the film lacks its own unique identity because of it. It just feels like a bunch of different things ideas and concepts I've seen before. Don't get me wrong, though, I liked the film. I think the film does a good job at centering the film around the leads and not necessarily around the whole concept itself, though it is a give and take, obviously. I just don't think the whole romance triangle as the real main narrative arc of the film is something that's that compelling. It's not like they beat you over the head with it, but it is an important part of what's driving the characters, more so than even being able to make money by giving themselves the results of tomorrow's races so they're able to bet on them and get a guaranteed win. I did like the certain manipulation going on there in order for a certain character to get something they wished for but, outside of that, a lot of it boils down to the romance triangle between Jasper, Finn and Callie and it's just not anything that's that intriguing to focus a movie with such an interesting concept on. But that's just me. The performances are good, however and the writing, while telling a story and using a concept and themes that have been done before, is still more than solid and I was legitimately interested in seeing where the film would end up, particularly the inconsistencies between the photo not taking anymore photos during the daytime and only doing taking them at 8 pm. Not a perfect movie, by any means, but one that offers a good and slightly interesting sci-fi flick. I'd recommend it as a Netflix watch only.