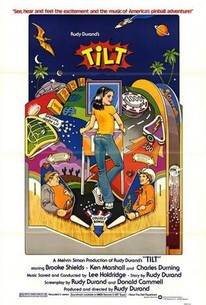 After getting caught cheating his bookmaking boss over a high-stakes pinball wager, Neil Gallagher (Ken Marshall) leaves his Corpus Christi home for Los Angeles, hoping to make it big as a folk rock balladeer. With best friend Henry (Harvey Lewis) in tow as his manager, Neil finds only failure, but when they come across a streetsmart 14-year-old pinball whiz named Tilt (Brooke Shields), he envisions a plan to get rich quick and save face in his hometown. Impressed by Neil's music, Tilt agrees to hitchhike with him to Texas, thinking she's helping to raise money for a demo tape. They stop by roadside arcades along the way to hustle petty gamblers into betting against the unassuming teen's pinball prowess. When the duo hit home with cash in their pockets, Neil brazenly challenges his former employer, an obese pinball champion known as "the Whale" (Charles Durning), to a 400-dollar game against the unbeatable Tilt. What Neil doesn't realize is that Tilt has caught on to his manipulation and lies, and all his big plans are going to blow up in his face when Tilt and the Whale secretly hold their own late-night pinball tourney.

A coming-of-age film that is a bomb.

There are no featured reviews for Tilt at this time.