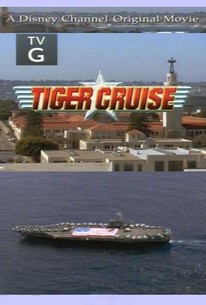 Based on actual events which occurred aboard the "USS Constitution", this made-for-cable movie begins as young Maddie Nolan (Hayden Panettiere) boards the Naval carrier under the command of her father Gary (Bill Pullman). Maddie is participating in a traditional "tiger cruise", wherein the family members of Naval personnel are invited to join the men and women in uniform during a typical days of maneuvers. Unlike her fellow passengers, however, Maddie has an ulterior motive: Weary of being a "Navy brat" who has spent her childhood moving from one base to another, she is hoping to persuade her father to give up the service and settle down in one place. But on the third day at sea, Commander Dolan's carrier is ordered to assume "combat mode": the date is September 11, 2001, and America is under attack! Tiger Cruise debuted August 6, 2004, on the Disney Channel.

The sobering events of 9/11 give this otherwise typical Disney movie unusual gravity.

Writers Anna Sandor and Bruce Graham deserve kudos for filtering a tough story through the eyes of kids without diluting the message.

[Hayden] Panettiere and [Bill] Pullman give such fine, well-matched performances that neither character has an edge. Their understated acting also prevents the movie from capsizing into sappiness.

With all the talk about duty, much of it set to stirring music, this TV movie sometimes comes across like a recruiting pitch.

There are no featured audience reviews yet. Click the link below to see what others say about Tiger Cruise!