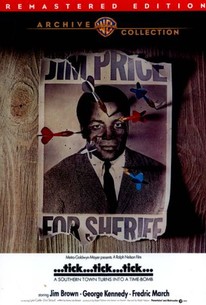 Racist rednecks fly into a rage after an African American lawman is elected to replace the white sheriff of a backwater Southern town. Despite the expected uproar, the new sheriff, with the support of the mayor, manages to keep the peace until he arrests a young white from a nearby town for running over a child with his car. The arrest leads the incarcerated boy's father to lead a revolt and stage a break out. This in turn causes the townsfolk to rally behind their sheriff and fight back.

Not just an earnest race drama, but also a fascinating example of how social issues were addressed cinematically in an earlier era.

Good drama movie about racism.This film is very under rated due to it's message hitting hard with few punches pulled.Brown gives a very good performance here and so do all the other actors.I like the cinematography color here,very crisp and eye pleasing.The screenplay is a little bland but does not ruin the movie at all.Not for people who do not like seeing the truth about the ugliness of prejudice and corruption from BOTH races.....

A true classic from the sevanties...captures to glory of segregation back in the days... I saw this again on VHS recently...an old guy that had a whole lot of classic cinema stuff, let me see it...You have got to see this...so you can FEEL how stupid racism is. Get it..if you can FIND it!